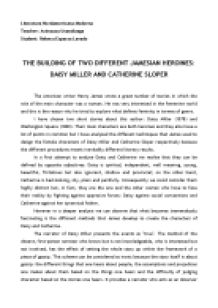 ï»¿Literatura Nordamericana Moderna Teacher: Aránzazu Usandizaga Student: Rebeca Esparza Lavado THE BUILDING OF TWO DIFFERENT JAMESIAN HEROINES: DAISY MILLER AND CATHERINE SLOPER The American writer Henry James wrote a great number of stories in which the role of the main character was a woman. He was very interested in the femenine world and this is the reason why he tried to explore what defines feminity in termes of genre. I have chosen two short stories about this author: Daisy Miller (1878) and Washington Square (1880). Their main characters are both heroines and they also have a lot of points in common but I have analysed the different techniques that James used to design the female characters of Daisy Miller and Catherine Sloper respectively because the different procedures meant inevitably different literary results. In a first attempt to analyse Daisy and Catherine we realise that they can be defined by opposite adjectives: Daisy is spirited, independent, well meaning, young, beautiful, flirtatious but also ignorant, shallow and provincial; on the other hand, Catherine is bad-looking, shy, plain and painfully. Consequently we could consider them highly distinct but, in fact, they are the one and the other women who have to face their reality by fighting against oppresive forces: Daisy against social conventions and Catherine against her tyrannical father. However in a deeper analysis we can observe that what becomes tremendously fascinating is the different methods that James develop to create the characters of Daisy and Catherine. ...read more.

When Daisy talks to Winterbourne or to Giovanelli her words do not seem especially relevant for the development of the story and it seems more important the way in which she is judged than the way in which she thinks about herself and her circumstances. As a conclusion it can be stated that in Daisy Miller the female character is designed by the others, that is, by comparison to the rest of people: the readers can not know what Daisy things or feels indeed because their perspective is limited to the people around Daisy and to their social prejudices. Now that I have analysed the method that Henry James uses to describe and to develop the character of Daisy it is the turn of Catherine Sloper. Mark Le Fanu points out how Henry James draws a complex character in his main character, Catherine: Character, necessarily, is depicted from outside and inside. Outside, that is to say, the impression made by Catherine on the other personages in the story; and inside, the impression made on Catherine as the events take their resolute course. In this sense, we can roundly say that Daisy and Catherine are particularly different. In Daisy the narrator emphasises a description from the outside, only taking into account the opinion and the thoughts of the rest of characters but not Daisy in itself. When faced with a problem, Catherine's preference is to solve it internally, as illustrated in a conversation between her father and Aunt Almond: "And, meanwhile, how is Catherine taking it?" ...read more.

Because there is little action in the story, the reader has few opportunities to judge characters by their responses to changes in plot. There is much dialogue, but the characters true feelings often belie their words to each other. Therefore, the only way that we may understand the desires and motives of characters is through change in point of view. An important example of such technique influencing our understanding of the story can be found in chapter 20 when Morris and Catherine discuss the conflict with her father. In this section we see the action largely through Catherine's perspective. Her action, or inaction, has indicated that she is apathetic to both Morris and her father. So Henry provides a story in which the female heroine, Catherine, grows up through the story advances. She is able to acknowledge her independence from her father to reject his money and also to decide about becoming an "old maid". She can choose. We are provided a process of growing up, we can observe how her feelings change into something new. In conclusion, Henry James decided to write about to female heroines that has a lot of features in common: they both have to face oppresive forces (the father in Catherine's case and social prejudices in Daisy's story). But the fact is that the aesthetic result is completely different from one story to another because the author enables the reader to go inside the character in one case but not in the other so the literary work becomes highly different. ...read more.