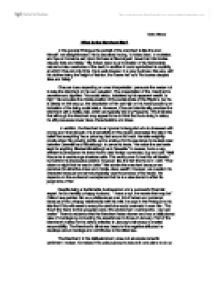 Claire Gittoes What is the Merchant like? In the general Prologue the portrait of the merchant is like the man himself, not straightforward. He is described having, "a forked berd, In mottelee, and hye on horse he sat; Upon his heed a Flaundryssh bever hat, His bootes clasped faire and fetisly." His forked beard is an indication of his fashionable nature but also overtones of the devil; in addition it could symbolize his duplicity, at which Chaucer only hints. He is well dressed, in a very business like way, with his clothes being the height of fashion, the "bever hat" and "his bootes clasped faire and fetisly." Chaucer does depending on ones interpretation; persuade the reader not to take the Merchant on his own valuation. The presentation of the Merchant is secretive and dignified: "his social status, bolstered by his apparent wealth, is high." He occupies the middle position of the social strata of the Pilgrims, but he is clearly on the way up, the description of him sat high on his horse possibly an indication of his rising social status. However, Chaucer intentionally provides the Merchant with a fabliau tale, which are typically told my Peasants. This indicates that although the Merchant may appear to be or think that he is rising in status, he still possesses lower class characteristics and ideas. ...read more.

January serves as a vehicle for the Merchant, whose attitudes, opinions, and perceptions of women classify him undoubtedly as a motley-clad misogynist, for example, when she said that woman were created for mans help" That womman is for mannes helpe ywroght." Characteristically, he is a fool. January is developed as a vehicle through the connection of teller to tale, textual implications of misogyny, and the limited sight (faulty or deliberate) experienced by key characters. The Merchant's misogyny is a product of his marital disillusionment. His misery and resulting hatred could be likened to purchasing a faulty product, or falling victim to false advertisement. One could assume, in a manner of speaking, that he bought more than he bargained for when he entered into marriage. The Merchant has a "special view of the male-female relationship and to the theme of 'sight'- of the way in which men 'see' what their desires condition them to 'see'- which is a recurrent theme in the general plan." The fact that the Merchant hates women can be textually supported. Near the very beginning of his tale the Merchant presents us with four exempla of 'good wives' from the Bible, "Lo, how that Jacob, as thise clerkes rede, By good conseil of his mooder Rebekke, Boond the kydes skyn aboute his nekke, For which his fadres benyson he wan. ...read more.

Also, the Merchant is characteristically concerned with property, and how the taking of a wife will diminish it: "The Merchant's furious indignation at his wife only exacerbates his desire for property. Because his private property has betrayed him -one gathers that his wife was something more than wax- he desires more property all the more intensely, property which, because he owns it, will reinforce his sense of self." The Merchant holds very strong views on the aristocracy and the court, which is comprehensible as he is a bourgeois. The Merchant reveals these views throughout his tale, for example, when describing the courtmans he creates a sycophantically character who is the ultimate courtier agreeing with everything rather than acting as an advisor, "I holde youre owne conseil is the beste. For, brother myn, of me taak this motif, I have been a court-man al my lyf, And God it woot, though I unworthy be." To conclude, the Merchant is a misogynist, he observes the code of courtly love with disdain and holds cynical views about the clergy and the aristocracy. He attempts to support his views by providing exempla, which are more often than not subverted thereby altering their original meaning or inclination. Overall the Merchant takes a very cynical approach to the many issues raised by his tale, revealing a great deal about his character even in the most through-away lines, a vast amount can be learnt. ...read more.