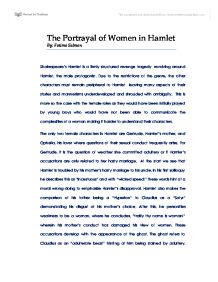 Women in Hamlet. The only two female characters in Hamlet are Gertrude, Hamlets mother, and Ophelia

The Portrayal of Women in Hamlet

Shakespeare’s Hamlet is a firmly structured revenge tragedy  revolving around Hamlet, the male protagonist. Due to the restrictions of the genre, the other characters must remain peripheral to Hamlet  leaving many aspects of their stories and mannerisms underdeveloped and shrouded with ambiguity.  This is more so the case with the female roles as they would have been initially played by young boys who would have not been able to communicate the complexities of a woman making it harder to understand their characters.

The only two female characters in Hamlet are Gertrude, Hamlet’s mother, and Ophelia, his lover where questions of their sexual conduct frequently arise. For Gertrude, it is the question of weather she committed adultery or if Hamlet’s accusations are only related to her hasty marriage.  At the start we see that Hamlet is troubled by his mother’s hasty marriage to his uncle, in his first soliloquy he describes this as “incestuous” and with “wicked speed!” these words hint at a moral wrong-doing to emphasize Hamlet’s disapproval. Hamlet also makes the comparison of his father being a “Hyperian” to Claudius as a “Satyr” demonstrating his disgust at his mother’s choice. After this, he personifies weakness to be a woman, where he concludes, “frailty thy name is woman!” wherein his mother’s conduct has damaged his view of women. These accusations develop with the appearance of the ghost. The ghost refers to Claudius as an “adulterate beast” hinting at him being stained by adultery. Furthermore, he calls Gertrude his “seeming virtuous Queen!” which taints her image as a righteous wife, suggesting that she might have committed adultery and only appeared to be “virtuous”. However this is only a hint that is not proven as the ghost is pressed for time, he says, “my hour has almost come” which prevents a direct explanation, however it stresses the importance of the news he bears. Hamlet’s response to this shows that he is shocked, “O most pernicious woman!”. The exclamation mark highlights his surprise which means that he has learnt something new about his mother from the ghost, he accuses her of being wicked which further plummets his view of women. What deepens the ambiguity of this situation is where the ghost says, “leave her to heaven” which shows that she has not wronged the deceased king too badly and that she may only be guilty of marrying quick.

Furthermore, in the closet scene, Hamlet makes a comparison of Gertrude replacing the “rose” with a “blister” which was the mark of a whore. However in that same scene we find that Gertrude is a simple innocent person when she responds, “As kill a king!” her shock shows her detachment from Claudius’ plan and naïve nature.

Although she has tainted Hamlet’s view of women, Gertrude is still a strong mother to Hamlet where she does not reveal his secret to Claudius which further demonstrates her morality despite possibly being portrayed as a lustrous woman.

Similarly, there are also doubts about Ophelia’s sexual conduct concerning weather she has lost her virginity to Hamlet (being unwed) or not. We first start to think of this during the nunnery scene, where Hamlet says to Ophelia, “Get thee to a nunnery!” he is telling her to join a brothel implying that she is like a whore, he also asks her “are you honest?” where honesty here is linked to a woman’s virtue. In the next scene, Hamlet uses a series of puns to insult and degrade her sexually, he says, “shall I lie in your lap” and “between maiden’s legs” where the prepositions here suggests specific details as to possible sexual encounters between the two. Hamlet continues to play on words, for example he says “country” emphasizing on the first syllable to try to make Ophelia feel uncomfortable. However Ophelia controls herself, remains calm and allows Hamlet to vent out his anger.

Her ability to understand his puns and follow his hints arouses questions about her sexual awareness suggesting that she has learnt these ideas through first hand experience.

Furthermore, when Ophelia becomes mad, she sings songs about a deceptive ex-lover and pre-marital sex. We can consider this to be a possible explanation of her situation, however due to her state of mind, we cannot draw conclusions. To support this nevertheless, we can link the ambiguities about her death to this situation. The way she died was considered a suicide by the grave diggers, pondering over her rights to be buried in sanctified ground. Suicide by drowning was the popular method for unmarried pregnant women at the time, therefore this could be a clue as to Ophelia’s sexual status.

In general, becoming mad and committing suicide would grant a person freedom and excuse their behavior, however this is not the case for Ophelia, as a female character, Shakespeare has restricted her expressions of madness giving them a more feminine attribute with the songs and flowers as he has also done for the picturesque image of her death, “ her clothes spread wide and mermaid-like”. This shows that women those days constantly had to abide by social expectations and carry a reputation.

Looking back from this at the start of the play, Polonius and Laertes constantly tell Ophelia to “fear it”, “it” being her sexual awakening. Polonius warns her not to lose her “honor” which is linked to her virginity; this is made to seem like a treasure for a woman, the only valued thing that is constantly talked about throughout the play. The hypocrisy of the situation is of the double standards they lived by where Laertes was allowed to  be involved in “drinking , fencing, swearing, quarrelling, drabbing” yet this would not “dishonor him” whilst Ophelia had to blindly obey her fathers orders, firstly by rejecting Hamlet and later by spying on him for Polonius. A feminist Freudian critic, Jacques Lacan calls Ophelia a “piece of bait” showing her weakness in the situation, especially after her father’s sexually degrading “loose” comment which links her to an animal on a lead. Once again this is hypocritical, where her sexuality is only permitted to be revealed when it is needed for bigger plans, in this case it is used, however according to A.C.Bradley, “she is forsaken, and cannot repress the timid attempt to win her lover back by showing that her own heart is unchanged.” Whilst Hamlet sees her as being weak for following her father, one may also admire her strength for not losing her composure while Hamlet insulted her and her willpower for wanting to help her father, and also her underlying wish to help Hamlet through this.