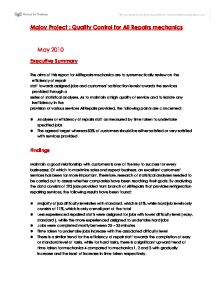 Business Statistics. The aims of this report for AllRepairs mechanics are to systemectically review on the efficiency of repair staff towards assigned jobs and customers satisfaction levels towards the services provided through a series of statistic

series of statistical analyses. As to maintain a high quality of service and to isolate any inefficiency in the

Maintain a good relationship with customers is one of the key to success for every businesses. Of which to maximize sales and repeat business, an excellent customers’ services has been far more important. Therefore, research of statistical analyses needed to be carried out to assess whether companies have been reaching their goals. By analyzing the data consists of 293 jobs provided from branch of AllRepairs that provides refrigeration repairing services, the following results have been found: 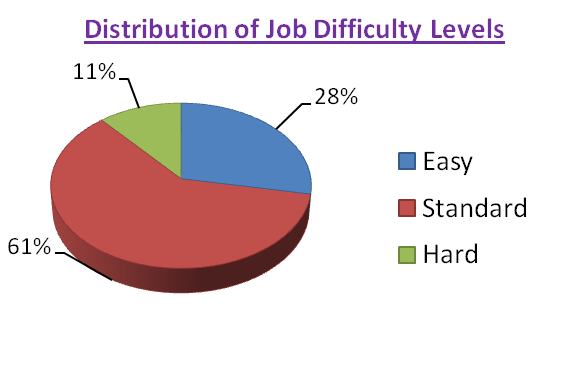 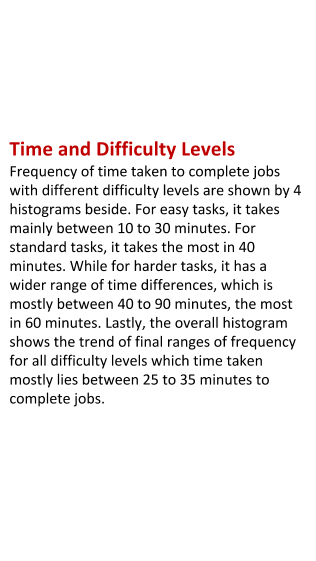 Correlation of Time and Difficulty

According to figure 7, for easy task with difficulty 1, the time range is narrow ranged from 10 to 30 minutes. For Harder task ( difficulty 3 ), time range is more wider from 10 to 90 minutes. In addition, the trend line shown as upward sloping, indicating that there is a positive correlation between time and difficulty levels, the correlation coefficient is approximately equal to 0.6 which is closed to 1, thus indicate that time taken to undertake jobs increase with the associated difficulty level.

From Figure 8, it shows that the trends of time taken to perform easy and standard jobs are very similar. Reason behind are that easy and standard tasks require less ability, experience and time to deal with assigned tasks, for example, less time and skills used to deal with refrigerator fixing or replacement. While for harder jobs, Mechanic 4 has a higher trend of time taken to complete harder jobs, reasons maybe that Mechanics 4 has little experience ( 2 years ) and has been assigned the least amount of hard jobs (3%), which has assigned only 2 hard jobs which took 69 and 88 minutes, as compared to others.

To conclude, the efficiency of 4 Mechanics are similar to each other in easy and standard jobs, while for harder jobs, there is a significant upward trend of time taken for mechanics 4 compared to mechanics 1, 2 and 3 with gradually increase and the least of increase in time taken respectively. In addition, AllRepairs has been achieved its agreed target whereas 80% of customers should be either satisfied or very satisfied with services provided. However, there are some limitations consist in with the result. Firstly, the data provided only consists of refrigerating repairing services which the results analyzed cannot respresent all employees in different branches in AllRepairs, and cannot be used to adequately evaluate the efficiency of repair staffs. Secondly, Mechanics 3 and 4 has only assigned for 6 and 2 hard jobs respectively which lead to inadequate result of efficiency of jobs performance regard to different Mechanics. Also, mechanics prior experience in repairing services before entering AllRepairs are not provided, therefore more accurate investigation and further analyze needed to be performed instead.