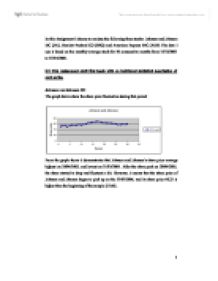 In this Assignment I choose to analyse the following three stocks: Johnson and Johnson DC (JNJ), Hewlett Packard CO (HPQ) and American Express INC (AXP). The data I use is based on the monthly average stock for 30 consecutive months from 31/12/2003 to 31/05/2006.

Q1 This Assignment shall first begin with an individual statistical description of each series.

The graph below show the share price fluctuation during that period:

The table above is a descriptive statistic of the Johnson and Johnson’s stock during the period using Microsoft Excel. In here, because the mean (59.78333333) is very close to the median (59.66), the points on the distribution appear approximately symmetrical. We can assume that the distribution is very close to a normal distribution. The standard deviation describes how the share prices cluster around the mean. In here, the standard deviation is relatively small which indicates that the share price is stable during this period.

The mean of the share prices is higher than its median, which indicates right-skewness. It means that most of the values are in the lower portion of the distribution. This distortion is caused by some extremely large values in the sample. The maximum of the sample is 32.9 and the minimum is 17.89 (see table above.) The positive skewness means that the distribution is right-skewed and that most values cluster around the lower portion with the exception of some large values. These large values pull the mean upward so that the mean is greater than the median. The negative kurtosis means that the distribution is “flat.” The standard deviation is similar compared to Johnson and Johnson’s shares in this report, but Hewlett Packard’s share price has been fluctuated a little bit. General speaking, Hewlett Packard’s share price has been relatively stable during the period with a hint of future increases.

For American express I would suggest to “sell” the share because its share is now at its highest point (concluded from the American Express graph). So it’s wise to sell it now. In addition, information from London exchange market indicates that American express’s shares are decreasing from June 2006 to September 2006, a little increase from September to December 2006, afterward it towards decreasing direction. Generally in 2007, American express is the weakest stocks in the Dow Jones industrial.

Moreover, I would also like to consider the possibility of share portfolio. As I have indicated before Johnson & Johnson and Hewlett Packard make a fairly okay portfolio.