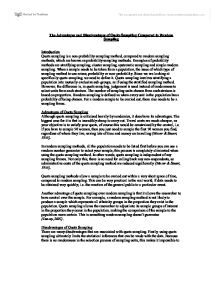 The Advantages and Disadvantages of Quota Sampling Compared to Random Sampling

The Advantages and Disadvantages of Quota Sampling Compared to Random Sampling

Although quota sampling is criticised heavily by academics, it does have its advantages. The biggest case for it is that is incredibly cheap to carry out. Travel

We have to also consider the possibility of bias erupting within the quotas at an individual level, leading to misrepresentations of the population. Take for instance; there is a quota for over 60 year olds. If the interviewer only finds people who range from 60 years old to around 65, then there is no representation of people who much older than 65 (Moser & Stuart, 1953).

Another example may be that the interviewer doesn’t like to travel to certain places, therefore only interviews people from a certain area, leading to selection bias in the sample. Random sampling doesn’t have this problem; “Random selection is the only selection mechanism in large-n studies that automatically guarantees the absence of selection bias (Epstein & King, 2002).”

Quota sampling also has the problem of non-response bias, a form of selection bias (selection bias is a non-sampling error). If somebody refuses to be a part of a study, then quota sampling allows the interviewer to go and find the next person who is willing, which results in data that is not wholly representative of the population. The reason for this is, that non-respondents probably have certain characteristics, and because the data obtained from the sample will not represent them at all (it will only be representative of respondents)