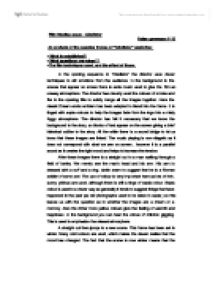 Film Studies essay - Gladiator Helen gammons 11 D An analysis of the opening frames of "Gladiator" exploring: * What is established? * What questions are raised ? *The film techniques used, and the effect of these. In the opening sequence to "Gladiator" the director uses clever techniques to stir emotions from the audience. In the background to the scenes that appear on screen there is eerie music used to give the film an uneasy atmosphere. The director has cleverly used the colours of smoke and fire in the opening title to subtly merge all the images together. Here the classic Dream works emblem has been adapted to blend into the frame. It is tinged with sepia colours to help the images fade from the logo into a misty foggy atmosphere. The director has felt it necessary that we know the background to the story, so blocks of text appear on the screen giving a brief historical outline to the story. All the while there is a sound bridge to let us know that these images are linked. The music playing is non-diagetic as it does not correspond with what we see on screen , however it is a parallel sound as it creates the right mood and helps to increase the tension. ...read more.

From the historical content that we are given, I believe these images to be happy memories of the life that the soldier once had. Achieving Closure - The use of repeated image in the final frames of "Gladiator" Helen Gammons 11D When I watch a film, I like twisted endings, like those you get in many horror films. I also like endings that explain the story. When you watch horror films you may know who the killer is but you still don't understand how they pulled off the murder until you reach the end of the film. I find those kinds of films exciting because suddenly all the pieces of the puzzle fit together. Films that leave you still asking questions generally lead to sequels where many questions are answered and the story is explained in more detail. A good example of this is The Matrix Series. Each new film introduces more story line and new twists and turns. This leaves the viewer in suspense and makes them want to see the next film in the series so that troubling issues can be resolved. Although these endings add suspense, if there is not a sequel made then these types of endings are generally unsatisfying. A good ending should make u feel that all the issues in the film have been resolved and that the story has finished, but they have ...read more.

Why has the director chosen to paint the picture in "real time" colours? In my mind I think that the floating body could possibly represent his spirit. He has finally been set free and can now join his wife and child. This however is not the first time that we have seen picture like this, previously when the soldier was making a journey into slavery he was carried across the desert floor. The camera angle on these two shots was exactly the same, but instead of the soldier making his journey into slavery he is now making a journey into the afterlife. I think that the director has been very clever in his use of repeated images. He uses familiar images at key points in the film so that the death of the soldier is more acceptable in our minds. We find it easier to accept his death as throughout the film he has had dreams of being reunited with family in the fields of barley, so that's where the audience feels he belongs. The repeated use of images leads us to believe that the soldier's death is inevitable. I do feel that the movie gives us a sense of closure and so it easier to accept the overall outcome of the battle. The ending of gladiator is satisfying to an audience as all their previous unexplained questions have now been answered. Therefore I believe that the film "Gladiator" does achieve closure to give the audience a satisfied ending. ...read more.

I think this is a concluding paragraph worthy of an undergraduate essay, if only for the profundity of the observation that the director manufactures acceptance of tragedy in the audience in the way described. Amazing!

As a description of how closure is achieved overall, it lacks a lot because it focusses solely upon the repeated flashback to Maximus Decimus Meridius' home and family, when of course there are many other thematic strands that are opened and then resolved in the course of the film, but within the scope of this micro-analysis, I'm very impressed.