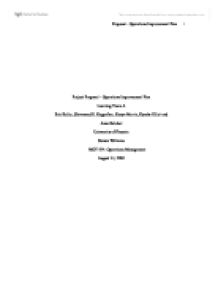 Project Proposal - Operations Improvement Plan Learning Team A Eric Keller, Shivanand R. Koppalkar, Kenya Morris, Kyesha Elliot and Anna Hatcher University of Phoenix Steven Williams MGT 554: Operations Management August 14, 2006 Introduction Regardless of what line it is or the reason for a line, Americans are impatient. Of all the burdens on their time, people most resent waiting in line, according to a poll reported in the Wall Street Journal, 41% of those surveyed said they resent waiting in line more than any other drain on time (Culberson, 1996). Studies and reporting nationwide have developed a clear idea of how much Americans hate to wait in line. The body of knowledge about waiting lines are often called queuing theory. Queuing theory deals with the formation and operation of lines. By using the fundamental laws of probability and statistics, a planner can model almost any system in which a line is formed by using queuing theory (Grandsberg & Basilotto, 1998). ...read more.

This incident introduces the topic of this proposal which is "It takes to long to see a teller at a bank." Problem Statement Teller contact with the retail customer is a primary interaction with the banks customers. Therefore, the Learning Team A members posit an average of more than 20 customers per hour with a wait time mean of five minutes and an upper control limit of three standard deviations, approximately three minutes. This assumes five teller stations and three personal banker positions. In addition, this would also assume two drive-up positions in a branch. If the average per hour should be below 20 customers, this would suggest a different problem than queuing and would posit a need for a marketing promotion. Library References Rationale The impact of waiting in line on Consumers The Reference mentioned above covers various subjects. ...read more.

This implies that personal face-to-face banking will involve and attract people to arrive at the bank and will involve the waiting time. When time is money, will banks make any? Challenges faced by banks regarding the balance between their two extremes of customer. The reference talks about the efforts of banks to make teller lines shorter with a dual challenge of meeting the expectations of more technology-savvy customers without ignoring the needs of customers who do not need new technology. Process for reducing customer waiting in over-the-counter service operations The case studies focused on over-the-counter (OTC) banking services. The use of game-play tactics (SBM) in the banking chamber was highly successful. It provided a mechanism for designing constraints that addressed issues of the incomplete and inaccurate system state knowledge usually held by the tellers. Further, the process promoted the development of a team ethos, and this change in attitudes had positive repercussions on the overall working environment. ...read more.