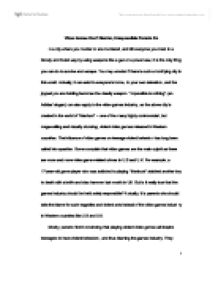 Video Games Don't Murder, Irresponsible Parents Do In a city where you murder or are murdered, and kill everyone you meet in a b****y and brutal way by using weapons like a gun or a power saw, it is the only thing you can do to survive and escape. You may wonder if there is such a horrifying city in this world. Actually, it can exist in everyone's home, in your own television, and the joypad you are holding becomes the deadly weapon. "Impossible is nothing" (an Adidas' slogan) can also apply to the video games industry, as the above city is created in the world of "Manhunt" - one of the many highly controversial, but mega-selling and visually stunning, violent video games released in Western countries. The influence of video games on teenage violent behavior has long been called into question. Some complain that video games are the main culprit as there are more and more video game-related crimes in U.S and U.K. For example, a 17-year-old game player who was addicted to playing "Manhunt" stabbed another boy to death with a knife and claw hammer last month in UK. But is it really true that the games industry should be held solely responsible? ...read more.

Otherwise, parents should be the first to take the blame if they fail to do so. Though the harmful effects of playing violent video games on the behavior of teenagers has yet to be proved by the professionals, it is still advisable to keep minors away from violent video games as prevention is better than cure. Since teenagers are not mature enough to resist the temptation and discipline themselves, this leads to their higher risk of developing an addiction, which is to play the games consistently and uncontrollably and even lose the ability to distinguish between the virtual world and the reality in some extreme cases. Therefore, parental guidance is the most crucial factor, it is the main duty of parents to keep an eye open for what their children are playing and give proper instructions whenever necessary to keep them away from unsuitable games and media. If they had done so and spent more time with and taken care of their children, much of the tragedies happened could have been avoided. Why were they not aware of their children getting and playing violent video games? Even if their children did play the games consistently, they still had a lot of time to realize that and stop them from playing before they got addicted. ...read more.

Only by doing so should their children not getting violent video games easily. Isn't it ironic that some parents blamed the violent video game having bad influence on their children but were unaware why they could get one and play it at home? In the prevention of teenage violent behavior and tragedy, parents should realize and promptly carry out their responsibility instead of blaming the violent video games, which are not the culprit of the tragic events happened. As more video games containing violent scenes will be released because "video games have evolved as an adult medium" (Thorsen, "Take Two"), it is unavoidable that teenagers will be exposed to more of them. That is why the role of parents is so important and indispensable in protecting teenagers. Other than that, the games industry has been actively putting its efforts in tackling the problems by holding reviews and constant discussions such as at the Game Developers Conference in U.S. every year, game creators from all over the world gather to discuss the issue of minors and video games. Besides, a bill suggesting the sales and rental of violent video games to minors as a crime was also introduced to the Congress in USA in 2002. What the society needs are responsible parents and the preventive measure provided by the games industry. Only by doing so should the "city of Manhunt" only appear on the TV screen, but not in reality anymore. ...read more.