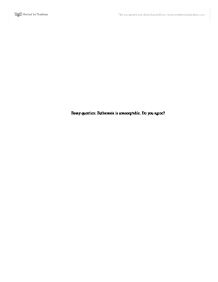 Euthanasia is unacceptable. Do you agree? Thesis statement: A lot of people think physicianassisted death or euthanasia should be an option available to a patient; however, others strongly believe that due to many reasons it must not be accepted by so

Essay question: Euthanasia is unacceptable. Do you agree? Outline I. Introduction Thesis statement: A lot of people think physician-assisted death or euthanasia should be an option available to a patient; however, others strongly believe that due to many reasons it must not be accepted by society. II. Body A. Firstly, there are moral and ethical questions concerning euthanasia. 1. Sacredness of human life 2. Hippocratic Oath 3. Responsibility for deprivation of life B. Secondly, medical factor plays an efficient role in the decision of ending the life. 1. Probability of doctor's mistake 2. Cases of recovery 3. Insensible judgements C. Finally, religious aspect is also important. 1. God's will 2. Value of suffering D. However, proponents of euthanasia have arguments that can prove the sufficient side of the issue. 1. Way to relief 2. Freedom of choice III. Conclusion In conclusion, while the supporters insist on permitting euthanasia, opponents are convinced that it should be forbidden. Euthanasia is unacceptable Is euthanasia a "Death with dignity bill" or an "Assisted suicide"? (Robinson, 2004, p.1). This question is still raised among those who support and who are against euthanasia. The word itself came from the Greek language with the meaning "good death", but for the first time the term "euthanasia" was offered by the English philosopher Francis Bacon in the 17th century ( Eugenics, euthanasia, and physician assisted suicide: an overview for rehabilitation professionals, 2006). ...read more.

If somebody wants to die, a doctor does not have to bear the burden and turn into a murderer. In short, doctors must not perform euthanasia because their duty is to save human lives but not take them away. Secondly, medical factor plays an efficient role in the decision of ending the life. The probability of doctor's mistake, which includes misdiagnosis, unsuitable treatment, unnecessary or wrongly performed surgeries, and also an inaccuracy in prognosis of the future passing of an illness (Arguments against euthanasia, n.d.), is one of the several things that can influence a person's choice. He may prefer easy death rather than feel unbearable pain while actually he was a victim of a medical error. There might be no an incurable disease or required medications exist. The statistics shows that in 155 per 1000 cases patients receive wrong diagnosis (How common is Misdiagnosis? n.d.). For example, Phil Collins who was diagnosed with cancer was totally convinced that he was really dying; two years later he found out that the doctor's conclusion was incorrect; the director of a hospital admitted his staff's fault (Phillips, 2009). Meanwhile, in one of the Baltimore clinics the study of J. Hopkins identified that 6 of 535 cancer determination's events were erroneous (How common is Misdiagnosis? n.d.). Altogether, every year only in the USA as a result of such mistakes 225,000 people die (Thirty Logical Reasons Against Physician-Assisted Suicide, 2009). ...read more.

Likewise, as a personality a patient like anyone else has freedom to choose whether to suffer or not. Nobody has the right to make somebody live if he does not want to because life can be controlled only by that one who owns it. For instance, the European Declaration of human rights guarantees sovereignty, personal liberty, and the opportunity not to suffer (Girsh, as cited in Should euthanasia or physician-assisted suicide be legal? n.d.). Yet some people in coma can not ask others to end their lives. Despite this situation a patient may prepare a special document in advance in order to inform about his decision in case of his vegetative state (Rachels, 1986). Such instructions show the physicians' respect to a patient's wishes. Overall, the principle of independence gives a person a power over his body and the chance to make choice. In conclusion, while the supporters insist on permitting euthanasia, opponents are convinced that it should be forbidden. Both of them have strong arguments and proofs. Those who are against believe in ethical values of human life, refer not only to words from the Hippocratic Oath but also to influential medical and religious factors, whereas defenders of the assisted suicide struggle for the freedom of individuality and reducing sufferings. Personally, I agree with the idea that euthanasia is unacceptable. Instead of killing hospitals and special institutions had better provide incurable patients with the proper palliative care which includes physical and emotional help. ...read more.