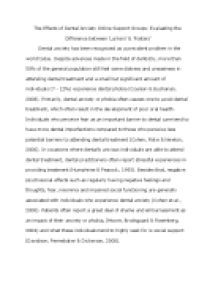 ﻿The Effects of Dental Anxiety Online Support Groups: Evaluating the Difference between ?Lurkers? & ?Posters? Dental anxiety has been recognized as a prevalent problem in the world today. Despite advances made in the field of dentistry, more than 50% of the general population still feel some distress and uneasiness in attending dental treatment and a small but significant amount of individuals (7 - 12%) experience dental phobia (Coulson & Buchanan, 2008). Primarily, dental anxiety or phobia often causes one to avoid dental treatment, which often result in the development of poor oral health. Individuals who perceive fear as an important barrier to dental care tend to have more dental imperfections compared to those who perceive less potential barriers to attending dental treatment (Cohen, Fiske & Newton, 2000). In occasions where dentally anxious individuals are able to attend dental treatment, dental practitioners often report stressful experiences in providing treatment (Humphries & Peacock, 1993). Besides that, negative psychosocial effects such as regularly having negative feelings and thoughts, fear, insomnia and impaired social functioning are generally associated with individuals who experience dental anxiety (Cohen et al., 2000). Patients often report a great deal of shame and embarrassment as an impact of their anxiety or phobia, (Moore, Brodsgaard & Rosenberg, 2004) and what these individuals tend to highly seek for is social support (Davidson, Pennebaker & Dickerson, 2000). One way of obtaining social support is through the use of social support groups, in which people gather voluntarily with an acknowledged purpose to solve a problem or help other individuals cope with their difficulties through provision of emotional support (Katz & Bender, 1976). They are proposed to work based on the idea that people who experience similar difficulties, illness, pain, condition or distress may have mutual understanding of ...read more.

in their study. A currently functioning online support group will be defined such that the group must consists of at least 50 members, have at least a current post on the online support group bulletin board or forum that has existed no longer than one month. Groups were also excluded if their aim was just to purely provide information. Also as identified from the literature, lurkers tend to participate less in support groups and may tend not to participate in any other additional activities happening within the group. This might cause underrepresentation of the lurkers within the group and thus affect the outcomes of the results. In addition, less could be known about individuals who do not respond to the questionnaires posted and thus could not provide a full representation of the members of the group. Personal messages would be sent to each and every respective member to promote participation as well as providing the average time needed to complete the questionnaire could maybe promote participation amongst the members, as time is an important factor in this modern world. Besides that, due to online support groups being internationally accessible, a wide variety of individuals from different backgrounds would be included. Although English language is the now the most globalized language across the world (Sharifian, 2013), there are still individuals who may speak a different language and have only a minimal knowledge of the English language. Due to the study being conducted mainly in English, there would be a problem in understanding the questions posed. In order to prevent this from occurring, an exclusion criterion, in which individuals who do not speak or understand English will be implemented by providing an explicit statement together with the information that would be distributed about the current study prior to participation. ...read more.

Thus, clear signs of exit and withdrawal should be implemented in the material used. In this case, due to the use of online survey software solutions in the current study which may not assimilate ?exit? or ?withdraw? buttons within the online questionnaires (BPS, 2013), the researcher would inform participants by stating at the beginning of the study that withdrawal of their responses could be made on the last page by ticking a check box which could be done regardless of whether they have fully answered the online questionnaire. Withdrawal of data after completion will also be considered. Instruction and contact information of the researcher will be provided at the beginning and at the end of the study for participants who intend to request for their withdrawal of their data. Participants would also be given a time period of 1 month of participation to withdraw their data before it is analyzed in which the data could not be withdrawn. Another possible ethical consideration in which it could affect the research project is the extent of its ?quality, integrity and contribution? as emphasized by the Code of Human Research Ethics (BPS, 2013). The lack of control due to the Internet?s greater variability and reach of participants across the Internet may affect the data that is collected. For instance, an individual could make repeat submissions over and over again. These repeat submissions may seriously affect the validity of a study (BPS, 2013). Ensuring that it does not happen could bring upon better scientific value to the study. The researcher will identify online survey platforms, which assimilate data forensic checks that prevents multiple submissions from a same individual and utilize one of them as the main platform for preparing the online questionnaires. ...read more.