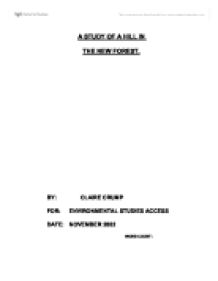 A Study of a Hill In the new forest

A STUDY OF A HILL IN THE NEW FOREST. BY: CLAIRE CRUMP FOR: ENVIRONMENTAL STUDIES ACCESS DATE: NOVEMBER 2002 WORD COUNT: A Study of a Hill in the New Forest. Objectives: The aim of the investigation was to study & identify the relationship between the changes in vegetation & soil over a hill in the New Forest. Background: The location of the hill was a site in the New Forest in Hampshire known as Dead Mans Hill. Please see map on page 3. It is understood that the site acquired its name during the Second World War, when it was used as a mass grave. The study was undertaken on a dry day in early October. Initially the sky was overcast with a breeze but during the latter part of the investigation the sun came out. At the top of the hill a clear view of surrounding countryside could be had. There was also a car-park and a well used road which ran along side it. The majority of the surrounding land was heathland. Which was covered with grassland, heather, bracken (which was starting to die off) & gorse (some of which was still flowering). There were also a few trees which punctuated the undulating heathland of Dead Mans Hill, including Scots Pine, Birch & Oak. Down the hill were several well used tracks & paths. A number of dogs with their owners & horse riders were around during the course of the investigation. There were several free roaming New Forest ponies grazing nearby. There was evidence of a heavy rabbit presence, in the form of plenty of droppings at the top of the hill. During the study a song bird was briefly heard. Although no deer were spotted at the site they are native to the Forest. Descending the hill, down the slope, was a well trodden track which had suffered some erosion. ...read more.

The dead leaf litter percentage may also have contributed to the insulation of these stations. Similarly the gorse coverage between 70 & 80 metres may also account for the fluctuations in surface temperature as the gorse created shelter for any wind that was present. Therefore the data collected from the belt line transect at Dead Mans Hill provided typical lowland heath results & reflected some interesting findings with regards to the ecosystem of a heathland environment & the changes between its vegetation & soil. In order to expand the contrasts between heathland & wetland vegetation & soil it would be valuable to conduct a similar investigation into an area that is solely heathland & then solely wetland. It would also expand the investigation if upland heath was included. A study of valley & hillside vegetation & soil, in all of these locations would also provide interesting data to expand the investigation. To further understand the relationship of heather & heathland a study into the regeneration of heather after a controlled burning had taken place could be conducted (8). CONCLUSION: The main findings of this study of vegetation & soil down a slope in the New Forest are that this sensitive environment is intricately balanced by the maintenance of its vegetation & soil. Typically the soil acidity ranges between 4.5 & 6.5. The free draining soil & the ling formed iron pan are represented in this environment. This is how the wetland at the bottom continues to be so acidic & why the vegetation is that of nutrient poor tolerant plant life. The prevalence of ling, cross leafed heath & bell heather is also reflective of typical heathland vegetation. As is their location eg: ling & bell heather in dryer soil & cross leafed heath in moister soil. This also applies to the abundance, absence & location of the other species at the site. Therefore the findings & conclusion of this study is that the relationship between the vegetation present & the soil it survives in on Dead Mans Hill is typical of lowland heath. ...read more.