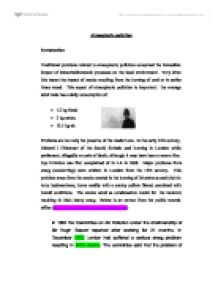 Atmospheric pollution Introduction Traditional problems related to atmospheric pollution concerned the immediate impact of industrial/domestic processes on the local environment. Very often this meant the impact of smoke resulting from the burning of coal or in earlier times wood. This aspect of atmospheric pollution is important: the average adult male has a daily consumption of: * 1.2 kg food; * 2 kg water; * 13.5 kg air. Problems are not only the preserve of the modern era. In the early 14th century, Edward I ('Hammer of the Scots') forbade coal burning in London while parliament, allegedly on pain of death, although it may have been a severe fine. Eye irritation was first complained of in LA in 1868. Major problems from smog (smoke+fog) were evident in London from the 19th century. This problem arose form the smoke created in the burning of bituminous coal (rich in tarry hydrocarbons; burns readily with a smoky yellow flame) combined with humid conditions. The smoke acted as condensation nuclei for the moisture resulting in thick heavy smog. Below is an extract from the public records office (http://www.pro.gov.uk/inthenews/pollution/pollution2.htm) In 1954 the Committee on Air Pollution under the chairmanship of Sir Hugh Beaver reported after working for 21 months. In December 1952 London had suffered a serious smog problem resulting in 4000 deaths. ...read more.

Res. Lett. 23 3727-3730 (1996)). Nitric acid is formed simply from the reaction of NO2 with OH radicals. OH + NO2 + M ? HONO2 + M (18) Sulphuric acid formation seems to be accelerated in smog conditions. This may be due to accelerated SO2 oxidation on particulates, but may be related to intermediates formed in the ozonolysis of alkenes. Impact of Photochemical Smog Particulates: reduce visibility, may be carcinogenic, containing heavy metals and polycyclic aromatic hydrocarbons. Ozone: causes irritation of the air passages, provoking asthma attacks in the susceptible, damages vegetation. PAN: lachrymator, phytotoxic, irritates air passages. NO2: affects visibility, irritates air passages. Control Strategies Control strategies involve reducing hydrocarbon and NOx levels through the use of catalytic converters, or changing one hydrocarbon for another according to its photochemical ozone creation potential (POCP). However, there are complications. Legislation in California in 1966 required the use of lean-burn to reduce hydrocarbon emissions, but led to increased NOx. This led to reduced O3 in downtown LA, partly because NO destroys O3 in a direct reaction. However, as the air travelled downwind, the NO2 is photolysed causing increased O3 concentrations in these areas. A problem with reducing NOx is illustrated in the figure below. If you are on the LHS of the figure, reducing NOx lowers O3, but on the LHS, it increases NOx. Three-way catalytic converters convert NOx, CO and hydrocarbon emissions to N2, CO2 and CO2+H2O respectively. These cost money, of course. ?? ?? ?? ?? ...read more.