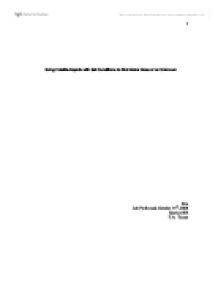 Using Volatile Liquids with Set Conditions to Find Molar Mass of an Unknown Erin Lab Performed: October 14th, 2008 Section 006 T.A: Teresa Introduction The purpose of this experiment was to find the molar mass of the unknown substance and compare it to the universal molar masses of different alcohols. This process can be done using the ideal gas law which is pressure and volume is proportionate to number of moles, the universal gas constant and temperature (Department of Chemistry, 2008). Jean Baptiste Dumas, a French chemist whom began his career as a pharmacist and later greatly contributed to modern science. His most well known and accredited work is studying vapour densities of elements which in turn is used to discover their molar masses. However, the scientist did not directly develop the Dumas method because of the nonexistence of the mole at that time. The Dumas method uses the formula M=mRT/PV,M for molar mass, m for mass, R for the universal gas constant, T for temperature, P for atmospheric pressure and V for volume (Sloane, Thomas O'Conor, 1909). Molar mass is the mass of one mole of a substance. The number of moles of a substance is the number of atoms in that element compared to the number of atoms of a carbon-12 molecule. For this experiment we used the ideal gas law. The ideal gas law is all collisions between molecules are free of intermolecular forces, so they collide but do not interact with each other (HyperPhysics Concepts, 2005). ...read more.

The solution to this is to dry the flask completely before weighing it. 4. The factors that would cause the calculated molar mass of methanol to be less than it actually is are not letting the flask cool enough so that all of the methanol did not condense and was still in gas form which would make the mass of the liquid lighter. The solution to this would be to wait the same amount of time for each flask so that there is a proper ratio. Letting the flask cool too much could have been another factor for making the molar mass lower than it actually is because the pressure would have been lower. Again this can be solved with letting the flasks cool down for the same amount of time. Measuring errors could have applied as well making the mass or volume of the liquid higher or lower and making the molar mass higher or lower. This could be solved with using more accurate ways of measuring the liquid. Conclusion The purpose of this lab, to find the molar mass of an unknown, was accomplished. The molar mass of the substance was 73.91g mol-1, and is the substance hexane. The sources of error greatly affected this lab and the substance that was predicted may not have been accurate due to the percent error. This experiment is not reliable for finding the molar mass of a substance because the molar mass will never be perfect due to the several possible sources of error. ...read more.