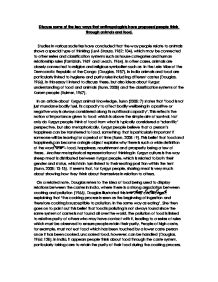 Discuss some of the key ways that anthropologists have proposed people think through animals and food. In India animals and food are particularly linked to hygiene and purity rules including different castes (Douglas, 1966). In this essay I intend to disc

Discuss some of the key ways that anthropologists have proposed people think through animals and food.

Studies in various societies have concluded that the way people relate to animals shows a special type of thinking (Levi-Strauss, 1962: 104), which may be connected to other series and classification systems such as house categories and human relationship rules (Tambiah, 1969 and Leach, 1964). In other cases, animals are closely connected to religion and religious symbolism such as in the Lele tribe of the Democratic Republic of the Congo (Douglas, 1957). In India animals and food are particularly linked to hygiene and purity rules including different castes (Douglas, 1966). In this essay I intend to discuss these, but also ideas about Kyrgyz understanding of food and animals (Bunn, 2008) and the classification systems of the Karam people (Bulmer, 1967).

In an article about Kyrgyz animal Knowledge, Bunn (2008: 7) states that ‘food is not just mundane bodily fuel, its capacity to affect bodily wellbeing in a positive or negative way is always considered along its nutritional capacity’. This reflects the notion of importance given to food which is above the simple aim of survival. Not only do Kyrgyz people think of food from what is typically considered a ‘scientific’ perspective, but also metaphorically. Kyrgyz people believe that a person’s happiness can be transferred to food, something that is particularly important if someone will be leaving for a period of time (Bunn, 2008: 9). This belief that food and happiness can become a single object explains why there is such a wide definition of the word ‘kϋt’ – food, happiness, nourishment and prosperity being a few of these.  Another metaphorical representation of thinking in Kyrgyz culture is the way sheep meat is distributed between Kyrgyz people, which is related to both their gender and status, which is in turn linked to their seating position within the tent (Bunn, 2008: 13-15).  It seems that, for Kyrgyz people, sharing meat is very much about showing how they think about themselves in relation to others.

On a related note, Douglas refers to the idea of food being used to display relations between the castes in India, where there is a strong association between cooking and pollution (1966). Douglas illustrated this in Purity and Danger, explaining that ‘the cooking process is seen as the beginning of ingestion and therefore cooking is susceptible to pollution, in the same way as eating’. She then goes on to point out this belief that food is polluting is not always found since the same system of castes is not found all over the world. The pollution of food is linked to relative purity of others who may have contact with it, leading to a series of rules which must be observed to ensure people retain their purity. People of high caste, for example, must not eat food which has been touched by a lower caste person once it has been cooked, uncooked food, however, can be handled (Douglas, 1966: 128). In India, it appears people think about food through the caste system, particularly taking care to retain the purity of their food during the cooking process.

Another culture concerned with the pollution of food described by Douglas is the Lele, who believe only certain people are suitable for various cuts of meat based on gender, age and cult (1966: 167-168). She describes the relationship between people, animals and food more fully in her article ‘Animals in Lele Religious Symbolism’ (1957). She describes how the cults within Lele culture and religion are subject to different rules regarding the edibility of animals and explains that people believe different animals and parts of animals should be set aside for people depending on their cult, and certain animals are banned for particular cults. The busk pig, for example is the Diviners’ cult animal since its habitat is the marshy areas which contain streams where the spirits are. Animals are classified as carnivorous, vegetarian, egg-laying creatures, mammals etc. according to their ‘breeding habits, sleeping, watering, and feeding habits’, however this leaves some animals anomalous, such as the pangolin (Douglas, 1966). People think of the pangolin as associated with the spirit world because of its scaly, fish-like tail and tendency not to run away from hunters, representing its closeness to humans, it also gives birth to one child at a time unlike most animals. The Lele think about animals in relation to the spirits and in particular distinction from themselves, hence the hunt in such an important event because the spheres ‘touch’. In contrast to the Kyrgyz people, the Lele’s view of animals and food is far more controlled by religion and beliefs than nutrition and wellbeing.

Tambiah (1969) studied the village of Baan Phraan Muan in Thailand, and particularly took note of the parallels between the arrangement of the house on the people level (above the stilts that houses sit on) in comparison to the arrangement of animal areas under the house. Certain animals are deemed more worthy than others and are therefore placed accordingly under the rooms of the house. The sleeping quarters of the people level is the most sacred room of the house, which is symbolically represented as it is the highest room and usually placed at the North end of the house (associated with the elephant and royalty). The area under the sleeping room is used for keeping buffalo as they are considered to be very important for agriculture in the village and must be treated well (Tambiah, 1969: 437). Certain rituals are associated with the buffalo’s slaughter due to its significance in the village. A household must not slaughter a buffalo was reared in the house, they have to obtain a buffalo from another house, the same ritual is observed between villages. This ritual is mirrored in attitudes to sexual relations/marriage as similar rules apply: relations within the house are only allowed if partners come from separate houses, and the consequences of these rituals not being followed are the same for both buffalo slaughter and marriage (Tambiah, 1969). Dietary rules  follow the same pattern as marriage and sex rules in a graduated manner. The closest household members (blood siblings) and animals (cats and dogs) are both taboo, whereas people and animals from other households are acceptable for marriage and eating respectively. Leach (1964) also made the connection between edibility and marriage in relation to the household, where the categories house, farm, forest and remote are related to siblings, first cousins, friends and distant strangers respectively. In Baan Phraan Muan, animals and people from each of these pairs of groups are either inedible and not marriageable or edible and marriageable.

Each of the household animals in Baan Phraan Muan has a ‘wild counterpart’ in the forest (Tambiah, 1969: 433), and people use the rules of edibility associated with domestic animals as a guideline for the wild forest animals, hence wolves are rejected as food based on the same reasoning used for the domestic dog. This is an interesting idea as it introduces a new kind of classification of animals into pairs as well as groups based on location.

The Cassowary, although technically a bird, is not considered one by the Karam people of Kaironk Valley in Papua New Guinea (Bulmer, 1967). Like the pangolin mentioned above, the Cassowary is thought of as the only member of its own category (or taxa). The taxonomy the Karam use has two levels, primary being the broader category more influenced by cultures (in which birds and bats are in the same group), and terminal being the more detailed category which recognises species variation (based on morphological factors and habitat)(Bulmer, 1967). On a morphological level, the Cassowary does differ from other birds in that it cannot fly, appears to be wingless, lives in the forest unlike other birds, and is thought to have human-like legs. However a more important difference between the Cassowary and other birds for the Karam is how it is thought to have a special relationship with humans.

In Karam mythology the Cassowary was formerly a human woman, which would explain the way the Karam think of the Cassowary as in some way ‘equated with man’ (Bulmer, 1967: 17).  A special way of hunting is employed for the Cassowary which is unlike the hunting of other creatures due to its special connection with people: hunters practice avoidance, the blood of a Cassowary is never shed, and only one or two people can hunt at a time (Bulmer, 1967: 12).Following the hunting of a Cassowary, the killer is considered ‘ritually dangerous’ is the same way as someone who has killed another person is, and has to eat the heart of the Cassowary he killed (if a person has been killed, the killer has to eat the heart of a pig. This concordance of attitudes towards killers of the Cassowary and human beings highlights the way Karam people think about the Cassowary and other people as related, an idea also attributed to the Lele in reference to the pangolin. The Karam’s taxonomy includes not only morphological differences but also cultural and mythological factors which set aside the Cassowary from any other animals.

In contrast with most of the people mentioned above, Western perspective on food and animals is scientific and focuses on physical attributes far more than culture or religion. However, this is was not always the case: food and fasting as religious symbolism are still used today, but to a much lesser extent than before. The view that abstaining from food is holy has been taken over by notion of fasting being a symptom of eating disorders today (Bowie, 2000: 85). Since the first documentation of anorexia nervosa in 1873, the general attitude towards fasting has become increasingly negative and disassociated with religion and holiness except under special circumstances (e.g. Lent/Ramadan). Although the main approach to food in the West is based on nutrition and wellbeing, religious connotations should not be ignored, and on a religious level, the West’s view may be considered similar to some of the cultures discussed above who also (partly) associate their food with beliefs.

There are both similarities and overlaps between the ways people think about animals and food between different cultures and groups of people, but there is also considerable variation. From an almost exclusively nutrition and health based perspective in the West to the views of people such as the Lele and Karam, who seem far more influenced by religion and beliefs. However there is an understanding within many cultures of both scientific and culture-based outlook on food and animals through classification, even if the distinction between them is not marked.

Bulmer, R. 1967. Why is the Cassowary Not a Bird? A Zoological Taxonomy Among the Karam on the New Guinea Highlands. Man,

Tambiah, S.J. 1969. Animals Are Good to Think and Good to Prohibit. Ethnology,