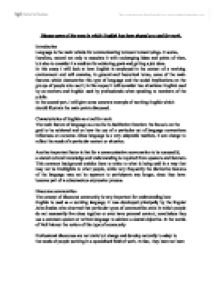 Discuss some of the ways in which English has been shaped as a tool for work.

Discuss some of the ways in which English has been shaped as a tool for work. Introduction Language is the main vehicle for communicating between human beings. It seems, therefore, natural not only to associate it with exchanging ideas and points of view, but also to consider it a medium for achieving goals and getting a job done. In this essay I will look at how English is employed in the context of a working environment and will examine, in general and theoretical terms, some of the main features which characterize this type of language and the social implications on the groups of people who use it; in this respect I will consider two situations: English used by co-workers and English used by professionals when speaking to members of the public. In the second part, I will give some concrete example of working English which should illustrate the main points discussed. Characteristics of English as a tool for work The main feature of language as a tool is its facilitative function: the focus is on the goal to be achieved and on how the use of a particular set of language conventions influences an outcome. Since language is a very adaptable medium, it can change to reflect the needs of a particular context or situation. Another important factor is that for a communicative conversation to be successful, a shared cultural knowledge and understanding is required from speakers and listeners. This common background enables them to relate to what is being said in a way that may not be intelligible to other people, while very frequently the distinctive features of the language may not be apparent to participants any longer, since they have become part of a subconscious expressive process. ...read more.

Helen Marriott, who researched what she called intercultural business negotiations, points out that explaining misunderstandings in terms of cultural experiences does not mean simply making generalized comparisons between the interlocutors ways of talking. In the international business world of today other cultural factors beside national origins might be important for shaping speakers ways of talking business in English, and for shaping their interpretation of events.(quoted in Mercer, 1996, p. 90). Paolo Cordone (R4453547) TMA 03 Option Gender and status Beside the influence of the work culture on speakers choice of language there is the important aspect of gender, which influences the way conversations take place. In her research, Janet Maybin (1996) discovered that men tend to exercise more influence over the choice of topics, to interrupt female partners and to dominate the interaction as well as control codeswitching in multilingual conversations. A similar pattern can be identified with regard to job status. The higher-ranking individual is the one who generally steer the conversation and selects the type of language. One interesting investigation carried out by Nicola Woods attempted to find out which one of the two factors has the greatest effect on speakers control of a verbal interaction. Her results showed that when the two power bases of gender and occupational status are at work, then the former gender tends to exert the greatest influence on floor apportionment Essentially, while the power base of occupational status did influence the way that both men and women organized conversation [...], nevertheless even when women held high-status occupational positions male subordinates still organized the interaction ina way that allowed them to dominate the floor. (quoted in Mercer, 1996, p. 95). Working with the public Until now I have concentrated on issues particularly related to the working language within certain communities of discourse. ...read more.

are discussing the new features of an upcoming software release: Tony: We need to find out what other features are incorporated into 4.06. Sarah: The Eudora filter and smart browsing definitely need to be evaluated. Tony: Lets ask the marketing people to send us a detailed list of changes, since at the moment we dont know for sure. Fergus: I know that there is a lot of LDAP stuff. Tony: [5 secs]Ok, that's it then. The second last sentence had no specific relevance to the question asked in the context of the meeting; it was deliberately uttered to impress the other participants since the senior engineer was aware that nobody else would understand what LDAP was; furthermore no extra explanation was given to clarify what the technical term really meant and thus added nothing useful to the conversation. In fact the meeting was ended by the manager without taking notice of the engineer�s contribution. Extension of the language as a tool English has become a literal tool for work in the field of computer programming. especially in fourth generation computer code. Whereas older programming languages were made of indecipherable and cryptic terms and clusters of symbols, newer ones have become more user-friendly and adopt English-like commands. Snippets from Assembler (machine language),C (created in the 70s), and SQL (a fourth generation database language), illustrate the point effectively: Paolo Cordone (R4453547) TMA 03 Option (b Conclusion In this essay I have described in general terms the ways in which English is adapted to the needs of workers to achieve goals and communicate effectively in the workplace. I have looked at the quality of language in this context and the social factors which shape it. In the latter part of the paper I have presented some example of working English from the software industry, where English has become the dominating language. ...read more.