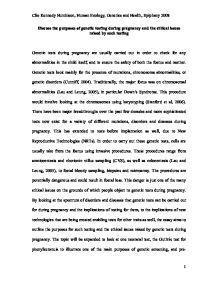 Discuss the purposes of genetic testing during pregnancy and the ethical issues raised by such testing Genetic tests during pregnancy are usually carried out in order to check for any abnormalities in the child itself, and to ensure the safety of both the foetus and mother. Genetic tests look mainly for the presence of mutations, chromosome abnormalities, or genetic disorders (Cunniff, 2004). Traditionally, the major focus was on chromosomal abnormalities (Lau and Leung, 2005), in particular Down's Syndrome. This procedure would involve looking at the chromosomes using karyotyping (Stanford et al, 2006). There have been major breakthroughs over the past few decades and more sophisticated tests now exist for a variety of different mutations, disorders and diseases during pregnancy. This has extended to tests before implantation as well, due to New Reproductive Technologies (NRTs). In order to carry out these genetic tests, cells are usually take from the foetus using invasive procedures. These procedures range from amniocentesis and chorionic villus sampling (CVS), as well as celocentesis (Lau and Leung, 2005), to foetal b****y sampling, biopsies and microarray. The procedures are potentially dangerous and could result in foetal loss. This danger is just one of the many ethical issues on the grounds of which people object to genetic tests during pregnancy. By looking at the spectrum of disorders and diseases that genetic tests can be carried out for during pregnancy and the implications of testing for them, to the implications of new technologies that are being created enabling tests for other traits as well, the essay aims to outline the purposes for such testing and the ethical issues raised by genetic tests during pregnancy. ...read more.

For women of thirty-five years or older, there is a greater risk of an abnormal number of chromosomes in the foetus (Cunniff, 2006), and samples can be taken through amniocentesis, CVS or blood sampling to test among older women or if a possible abnormality is detected through an ultrasound screening. Foetal blood sampling is useful in these circumstances, as it may be used for 'rapid fetal karyotyping' (Ibid). The risk of loss, however, is between 1% and 2%, making it more dangerous than amniocentesis or CVS and giving another reason for objecting to the procedure. A child with Down's Syndrome will have mental disabilities, certain physical irregularities and will need a lot of care, but it is not a fatal disease and as a result there are debates about whether this is strong enough grounds for choosing to abort a pregnancy. People with Down's Syndrome can have jobs, carry out day-to-day activities and live happy, relatively fulfilled lives. In some cultures Down's Syndrome are not considered significantly different from any other person (Detwyller, 1993), and many argue that one of the main dangers in being able to choose whether someone with Down's Syndrome should live is that society may move towards a eugenic ideal of what individuals should be like and begin aborting on other grounds as well. There are considerations, however, about who will care for an individual with Down's Syndrome, especially once the parents have grown older and are not capable anymore. Questions have been raised about whether it is fair to expect other relatives to step in and lend a hand. ...read more.

Early testing during pregnancy can allow safer termination and treatment, but can also provide couples that decide to keep the child despite any defects the time to learn about what measures they must take and get used to the idea of it. Finally, if a couple is aware that an autosomal recessive disease is present in both their families, and they are using NRTs for assistance in having a child anyway, there is the possibility that they could ensure that the embryo they use does not have the allele for that disease. This possibility of selecting traits has opened up debates on the ethical issues of being able to select other traits as well and the effect this will have on society as a whole. Other ethical issues range from access to the information provided by genetic tests, to tolerance within society for those who have some form of disability, and the effects on the emotional stability of pregnant women who feel pressured to have these tests carried out. Due to the costs and amount of controversy surrounding new innovations, it is unlikely that certain technologies will be commercially available for some time. As for the tests that are currently used, it is indisputable that there are huge benefits to the pregnant woman, her partner and family, and the child itself in their availability. Provided that laws are in place, and that the woman is able to make her own decisions, it is unlikely that the worries behind the more extreme ethical battles will become reality just yet. For the time being, it seems the purposes for carrying out genetic tests during pregnancy, as well as before and directly after, including the ethical reasons for having them, outweigh the ethical objections. ...read more.