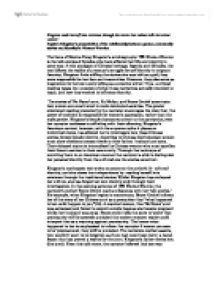 Explore Kingston's presentation of the relationship between gender, community stories and identity in Woman Warrior.

Kingston reads herself into existence through the stories her culture tells her about women' Explore Kingston's presentation of the relationship between gender, community stories and identity in Woman Warrior. The focus of Maxine Hong Kingston's autobiography The Woman Warrior is the talk-stories of females who have affected her life and identity in some way. A rich amalgam of Chinese heritage, legends and folktales, the text follows the reality of a woman's struggle for self identity in migrant America. Kingston finds stifling the stories she was told as a girl; they were responsible for her fear and insecurities. However, they also serve as inspiration for her own story telling as a creative writer. Thus a critical reading raises the question of what these narratives actually intended to teach, and how they worked to influence identity. The stories of 'No Name' aunt, Fa Mulan, and Brave Orchid accentuate how women are constructed in male dominated societies. The gender orientated reading promoted by the narrator encourages the view that the power of tradition is responsible for women's oppression, rather than the male gender. Kingston's female characters submit to the patriarchy; even her narrator confesses to colluding with their silencing. Kingston's American context, however, with the supreme value it places on individual choice, has allowed her to interrogate how these Chinese stories dictate female identity. ...read more.

Kingston reminisces, that 'as I grew up, I had learned the chant of Fa Mulan, the girl who had taken her father's place in battle,'(25). Brave Orchid tells her daughter stories that can be empowering as they are necessary. The paradox of Fa Mulan is that her 'disguise as a male warrior when in battle is meant to illustrate the potential power'1 that Chinese women can exert. The narrator 'learned that we failed if we grew up but wives or slaves,'(25). But it was not enough to demonstrate warrior powress, Fa Mulan's ultimate responsibility rested with her family, so 'the villagers would make a legend about my perfect filiality,'(47). It is derived from traditional Chinese Confucianism, wherein sacrifice is seen to justify the Chinese woman's secondary position in society. Kingston encourages readers to see that this legend has played a extremely influential role in shaping her perceptions of gender in society. Indeed it is a gender orientated retelling of the myth, so that our attention is directed towards the sacrifice and responsibility that females must endure. Although the narrator has gained success in school, the ' Chinese executed women who disguised themselves as soldiers or students, no matter how bravely they fought or how high they scored,' (42). She cannot fight to avenge her village, and her powress of education is not recognised.. ...read more.

The initial separation she had to endure from her family to gain this understanding resulted in a denial of her own rich culture. 'I had to leave home to see the world logically...I learned to think that mysteries are for explanation. I enjoy the simplicity.' (182) The Woman Warrior presents the relationship between gender, community stories and identity as variable, one is not dependent on the other. The narrator forms her identity through her context, time and heritage, and she shows this independence by reading herself into existence of the stories upon which she grew. Her interpretation of these talk- stories can be described as gender orientated, presenting obvious links with her own attitudes. Hence, Kingston 'reads herself into existence', by finally imparting her own values into a story, rather than by way of analysing them afterward, and trying to figure out the traditions embedded within may fit into her own life. Her cultural identity as a Chinese American has been strongly influenced by these talk stories she grew up with. By making these stories central to the construction of her memoirs, she makes the point that they are not her identity, her American context has allowed her to interrogate them, so that they are new. 1 'The Woman warrior as a Search for Ghosts',Gayle, K. Fujita Sato in Shirley Geok Lim (ed), (1991), Approaches to teaching Kingston's The Woman Warrior, MLA. 2 Feng, Pin, (1980), 'Maxine Hong Kingston', National Chiao-Tung University, Taiwan ?? ?? ?? ?? ...read more.