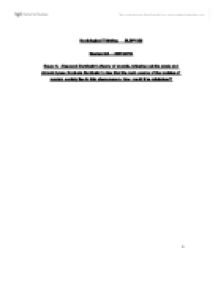 Expound Durkheim's theory of anomie, bringing out the acute and chronic types. Evaluate Durkheim's view that the main source of the malaise of modern society lies in this phenomenon. How could it be minimised?

Sociological Thinking SLSP1020 Student I.D. - 200194793 Essay 6. - Expound Durkheim's theory of anomie, bringing out the acute and chronic types. Evaluate Durkheim's view that the main source of the malaise of modern society lies in this phenomenon. How could it be minimised? Along with Marx and Weber, Durkheim outlined the characteristics of the transition of society to modernity and what was problematic with this shift. This essay will explain Durkheim's ideas on this transition, concentrating on the division of labour and social cohesion. I will explain how this path to modernity may lead to a state of anomie and outline the difference between acute and chronic forms of anomie. Finally, I will look at whether or not the general sense of depression (or 'malaise') of modern society is due to anomie and discuss how anomie could be minimised. In understanding the transition to modernity, Durkheim, like Marx, took a holistic approach and argued that society cannot be reduced to individuals...'society' was, Durkheim argued, a phenomenon in its own right. It did not depend upon the intentions and motivations of individuals for it's continued existence. ...read more.

Durkheim argues that people can be happy only when their wants are proportionate to their means. Left to themselves, human desires are boundless and this fact of human nature, together with necessarily limited resources, creates great unhappiness. As social restraints are weakened, humans no longer have limits upon their desires and aspirations. Whereas social order and morality previously limited their goals, the goals now become infinite in scope. As Durkheim warns "To pursue a goal which is by definition unattainable is to condemn oneself to a state of perpetual unhappiness." (Durkheim, 1970, pp.128) Durkheim defined two different forms of anomie - acute and chronic. Chronic anomie is that which is produced by a gradual weakening of social control in contrast to acute anomy which is caused by sudden changes either in the situation of a given individual, e.g. divorce, or in social institutions, e.g. economic booms and busts. The argument is thus further developed in his discussion of suicide where anomie is one of the four causes of suicide identified in Durkheim's classic study. Durkheim saw suicide as one of the most private acts an individual could perform, and were it therefore possible to explain that action in terms of society, his holistic approach to sociological analysis would stand. ...read more.

So the only way to minimise anomie is to make significant changes to these 'goals'. Merton (1968) concluded; " ... it is plain that differential pressures for deviant behaviour will continue to be exerted upon certain groups and strata only as long as the structure of opportunity and the cultural goals remain substantially unchanged." (Merton, 1968, pp.246) So it is possible to assume that if significant changes are made to societies 'goals' then we should expect to see corresponding changes in the people which are most effected by these goals and the pressures that come with them. In conclusion, the idea of 'anomie' is still very much relevant today and is especially evident in modern society, where we are further separated and divided by computer technology, the Internet, increasing bureaucracy, and specialisation in the workplace. Perhaps more than ever before, members of Western society are exposed to the risk of anomie. However, much of Durkheim's ideas of anomie have been criticised and even Merton's theory has been criticised for assuming too much conformity and consensus along with an overly integrated view of society, and an over socialised view of people. ...read more.