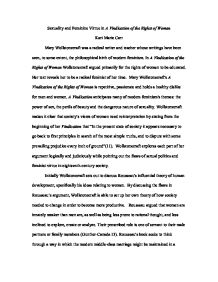 Feminist virtue in A Vindication of the rights of Woman.

Sexuality and Feminine Virtue in A Vindication of the Rights of Woman Kari Marie Carr Mary Wollstonecraft was a radical writer and teacher whose writings have been seen, to some extent, the philosophical birth of modern feminism. In A Vindication of the Rights of Woman Wollstonecraft argued primarily for the rights of women to be educated. Her text reveals her to be a radical feminist of her time. Mary Wollstonecraft's A Vindication of the Rights of Woman is repetitive, passionate and holds a healthy dislike for men and women. A Vindication anticipates many of modem feminism's themes: the power of s*x, the perils of beauty and the dangerous nature of sexuality. Wollstonecraft makes it clear that society's views of women need reinterpretation by stating from the beginning of her Vindication that "In the present state of society it appears necessary to go back to first principles in search of the most simple truths, and to dispute with some prevailing prejudice every inch of ground"(11). Wollstonecraft explores each part of her argument logically and judiciously while pointing out the flaws of s****l politics and feminist virtue in eighteenth-century society. Initially Wollstonecraft sets out to discuss Rousseau's influential theory of human development, specifically his ideas relating to women. By discussing the flaws in Rousseau's argument, Wollstonecraft is able to set up her own theory of how society needed to change in order to become more productive. Rousseau argued that women are innately weaker than men are, as well as being less prone to rational thought, and less inclined to explore, create or analyze. ...read more.

Wollstonecraft conveys a strong sense of female empowerment and individuality and by doing so portrays the differences between men and women. She concentrates much of her writing on the need for women to take power of their own lives and changes female s****l virtue from feminine to an almost masculine identity. Ashley Tauchert discusses Wollstonecraft's ideas of femininity and states that, In attempting to argue that the attainment of a singular model of virtue is dependent on an individual's degree of corporeal strength and health, a worrying over s****l difference, and a concern with the female body and desire, become inevitable. Throughout this Vindication, Wollstonecraft is interested in the nature of femininity, in what it means to have a female body, and where the borders and limitations of that body would fall, were it allowed or enabled to develop without restraints. (77) Wollstonecraft believes that it is possible for women to become more masculine and take power over their minds, beings and souls rather than having them corrupted by men. Taking control over ones desires in marriage is one way to become an independent, strong, contributing women in society. Wollstonecraft also argues that educating women will strengthen the marriage relationship. Her concept of marriage underlies this argument. A stable marriage, she believes, is a partnership between a husband and a wife. A woman thus needs to have equal knowledge and sense, to maintain the partnership. Wollstonecraft portrays marriage as an institution designed to channel s****l power, but sexuality can still be a disruptive force. ...read more.

(51) Wollstonecraft left her mark on Eighteenth Century society and feminist writers for centuries to come. She help to liberate female thought and strived for the betterment of man- kind. She concludes her argument of A Vindication of the Rights of Women with a warning and insight to all men by stating Be Just then, O ye men of understanding! And mark not more severely what women do amiss, than the vicious tricks of the horse or the a*s for whom ye provide provender - and allow her privileges of ignorance, to whom ye deny rights of reason, or ye will be worse than Egyptian task-masters, excepting virtue where nature has not given understanding! (201) Wollstonecraft explores each part of her A Vindication of the Rights of Woman logically and judiciously while pointing out the flaws of s****l politics and feminist virtue in eighteenth-century society. Mary Wollstonecraft set out her defense of women as rational beings, equally capable of benefiting from education and of performing the duties of citizens in her A Vindication of the Rights of Woman. Male power had prevented women from realizing their moral and intellectual capacities, and prohibited them from being able to exercise genuine judgment or attain genuine virtue. Nevertheless, while the equality of men and women as rational beings was central in her Vindication, the equality of roles was not. Women could still perform their duties as citizens from within the home and men as well as women needed to control their s****l desires in order to be productive husbands and wives as well as good citizens. Sexuality and feminine virtue were central to Wollstonecraft's argument and she prevailed in attaining her goal. ...read more.