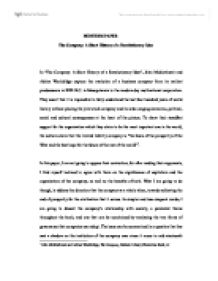 In &quot;The Company: A Short History of a Revolutionary Idea&quot;, John Micklethwait and Adrian Wooldridge

MIDTERM PAPER The Company: A Short History of a Revolutionary Idea In "The Company: A Short History of a Revolutionary Idea", John Micklethwait and Adrian Wooldridge capture the evolution of a business company from its earliest predecessors in 3000 B.C. in Mesopotamia to the modern day multinational corporation. They assert that it is impossible to fully understand the last four hundred years of world history without placing the joint stock company and its wide-ranging economic, political, social and cultural consequences at the heart of the picture. To show their steadfast support for the organization which they claim to be the most important one in the world, the authors claim that the limited liability company is "the basis of the prosperity of the West and the best hope for the future of the rest of the world"1. In this paper, I am not going to oppose their contention, for after reading their arguments, I find myself inclined to agree with them on the significance of capitalism and the organization of the company, as well as the benefits of both. What I am going to do though, is address the direction that the company as a whole takes, towards achieving the end of prosperity for the civilization that it serves. In simpler and less eloquent words, I am going to dissect the company's relationship with society, a persistent theme throughout the book, and one that can be scrutinized by analyzing the two forms of governance that companies can adopt. ...read more.

run should be considered as well in terms of benefits accruing to other stakeholders, instead of focusing rather narrow-mindedly on the immediate short term all the time. Having assessed the stakeholder companies and their philosophical backing in detail, I am going to move on now to the stockholder companies, building on the foundation that I have already created so far in order to compare the two and patronize one over the other. Stockholder companies, just to recap, are those which are managed with the intention of providing profits or returns on investment to the shareholders, or the owners of the business. However, even though they clearly prioritize the shareholders' interests over those of the other stakeholders, shareholder companies are still required to operate under the legal system while at the same time also conforming to the basic rules of society. After putting forth all the arguments in favor of the stockholder ideal and on the verge of doing the same for the shareholder one, I feel that at this point of time it is necessary to reveal that I share the bias of the authors, Micklethwait and Wooldridge, towards the latter. For now, in order to present my case for the shareholder model, I am going to make certain assumptions about the conditions that exist when this model is in operation. Though all these assumptions can never be absolutely true, I believe that relatively similar conditions can, in general, exist, with certain exceptions to every one. ...read more.

To conclude, I would like to stress that in today's world, the Anglo-American shareholder model is quickly gaining ground as opposed to the stakeholder one, which is even shedding some of its governing principles in its traditional strongholds of Continental Europe and Japan. However, in my view, the two models have come closer to each other over time rather than drifting apart, being displayed no greater than in America, the heart of shareholder capitalism, where companies are facing increasingly burdensome social responsibilities such as providing for the pension and healthcare costs of employees. That being said, I think that the flexibility and dynamism that is cultivated under the shareholder model will undoubtedly make it the most attractive model to implement, especially in an era where globalization and free trade will mean that competition will soar to new levels altogether. It is this rivalry though that will breed ingenuity on the part of companies, in the form of new methods, techniques, and technologies used by them. It is said that necessity is the mother of invention, and it is up to companies, society and the government to try to translate this innovation into economic and social welfare for everyone. 1 John Micklethwait and Adrian Wooldridge, The Company, Modern Library Chronicles Book, xv 2 Micklethwait and Wooldridge, 54 3 Leslie Hannah as quoted by John Micklethwait and Adrian Wooldridge, The Company, Modern Library Chronicles Book, 182 ?? ?? ?? ?? ...read more.