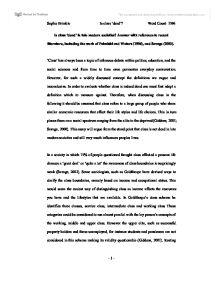 Is class 'dead' in late modern societies? Answer with reference to recent literature, including the work of Pakulski and Waters (1996), and Savage (2000). 'Class' has always been a topic of infamous debate within politics, education, and the social sciences and from time to time even permeates everyday conversation. However, for such a widely discussed concept the definitions are vague and inconclusive. In order to evaluate whether class is indeed dead one must first adopt a definition which to measure against. Therefore, when discussing class in the following it should be assumed that class refers to a large group of people who share similar economic resources that effect their life styles and life choices. This in turn places them on a social spectrum ranging from the elite to the deprived(Giddens, 2001; Savage, 2000). This essay will argue from the stand point that class is not dead in late modern societies and still very much influences peoples lives. In a society in which 75% of people questioned thought class effected a persons life chances a 'great deal' or 'quite a lot' the awareness of class boundaries is surprisingly weak (Savage, 2002). Some sociologists, such as Goldthorpe have devised ways to clarify the class boundaries, namely based on income and occupational status. This would seem the easiest way of distinguishing class as income affects the resources you have and the lifestyles that are available. ...read more.

The upper-class can be grouped as the wealthiest 1% of the population, which now controls 19% of the total population's wealth (Giddens, 2001). At another end of the spectrum is the working-class, this consists of the blue collared manual workers. Once the majority class it is now in decline, from a time when 40% of the population was working class to 18% now and the percentage still dropping (Giddens, 2001). The conditions of the working class are no longer what they once were, poverty is not rife within it and now the majority of working class own the own car and house. The working-class used to have strong implications and many individuals felt it part of their identity. Now people use it because they work and want to seem normal, strong bond seems to have gone (Savage, 2002). This is the class that most people relate to despite most are actually middle class. People do this because they want to seem typical to society but do not realise they are putting themselves in a lower social position than necessary (Savage 2002). Due to declining working-class and an almost unattainable upper-class the majority class is now the middle-class. It is the largest and most diverse of today's classes, covering a variety of lifestyles and occupations (Paluski & Waters, 1996). ...read more.

This is compared to 4% of manual workers who are the sons of professional, reflecting the likelihood of upward social mobility (Giddens, 2001). Mobility of class is possible but requires a lot of effort on an individual's part to break the behaviours associated with the class they initially belonged to. Pierre Bourdieu identifies this as a habitus and it is this that distinguishes them to a particular class. When people are put in situations outside that of their own class they may feel uncomfortable especially surrounded by others with a different habitus. People will consequently avoid such situations probably without realising they are doing so (Savage, 2002). This is one of the ways people could think class is declining, because they avoid other classes and so do not see the conflicting values. In conclusion it seems unlikely, considering the above evidence that society has become classless and concepts of class abandoned. Those who argue class is dead are most likely looking for the old rigid concepts associated with class and therefore missing the new evolved concepts and the fluidity of its effects. The boundaries are no longer as clear cut as they once were but are never the less still evident for those who care to look close enough. However, the decline in individuals identifying with their class has declined and the classes seem to be less cohesive because of this. This does not mean class is dead, it is very much 'alive and kicking' but not so obvious to see. ...read more.