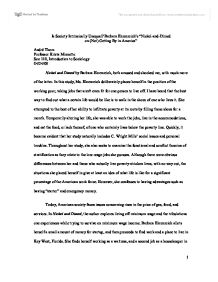 Is Society Intrinsically Unequal? Barbara Ehrenreichs Nickel-and-Dimed on (Not) Getting By in America

Is Society Intrinsically Unequal? Barbara Ehrenreich's "Nickel-and-Dimed on (Not) Getting By in America" Andr� Thom Professor Krista Minnotte Soc 110, Introduction to Sociology 04/24/09 Nickel and Dimed by Barbara Ehrenreich, both amused and shocked me, with much more of the latter. In this study, Ms. Ehrenreich deliberately places herself in the position of the working poor, taking jobs that aren't even fit for one person to live off. I have heard that the best way to find out what a certain life would be like is to walk in the shoes of one who lives it. She attempted to the best of her ability to infiltrate poverty at its roots by filling those shoes for a month. Temporarily altering her life, she was able to work the jobs, live in the accommodations, and eat the food, or lack thereof, of one who certainly lives below the poverty line. Quickly, it became evident that her study naturally includes C. Wright Mills' social issues and personal troubles. Throughout her study, she also seeks to examine the functional and conflict theories of stratification as they relate to the low-wage jobs she pursues. Although there were obvious differences between her and those who actually live poverty-stricken lives, with no way out, the situations she placed herself in give at least an idea of what life is like for a significant percentage of the American work force. ...read more.

Obedience seems to be quite important in keeping the poor down in society. With this example, functionalism seemed to best fit her work. Ehrenreich attempts to display our society as a caste system, where status is ascribed to individuals. Her research involved a sacrifice of actually living off the money she earned on the minimum wage jobs, and getting as close as possible as a reporter can get to the truth. She describes that even after hard work and obedience to management, the chance to move up in social class is very rare. How are people expected to achieve upward social mobility if they spend all of their waking hours working? How are they supposed to get an education to improve their conditions? It has been said that education is "the great equalizer," but the fact is that education is just not available for every impoverished individual in our society. She discovered concealed charges plaguing the poor. For example, if one could not pay for the deposit for an apartment, they were required to have to pay more money by paying by the week. She wrote that a poor person cannot save money by cooking large amounts of food at one time and freezing it, because the person lacks the capabilities to cook in large quantities. Since the government won't assist with medical care, an impoverished person cannot pay for regular check-ups and physicals. ...read more.

Many of the larger chains, such as Wal-Mart and Target, depend upon narrow profit margins, to build more stores, employ more workers, and to further expand their business. Remove the narrow profit margins and many companies might either close, move operations overseas or ideally change practices to help their workers. I advise there be a law to penalize the companies that produce overseas. The more jobs available, the more employers will have to compete with each other to attract workers. Resulting from the competition would be better wages, better benefits, better treatment and working conditions, including better job security. In conclusion, Nickel and Dimed is but a taste of the working poor. Her journey had its strengths and its weaknesses, but overall Ehrenreich was successful in infiltrating the working-class poor to give the more privileged a new view of the social struggles faced by many in the U.S. everyday. She was limited by who she was, a middle-class journalist unconditioned to a world requiring the strongest survivors. She was successful in her mission, to unveil to the public about the world of hardships and indignities many experience on a daily basis just to survive. By "becoming one of them," she was able to find modern social issues and personal troubles C. Wright Mills described decades ago. She discovered the conflict theory, functionalism, and symbolic interactionism in her work. Nickel and Dimed by Barbara Ehrenreich lead the reader to question the role of government in cases of extreme poverty and if having any job equates to a better life. ...read more.