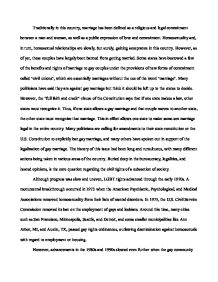 LGBT studies. History and future of same s*x marriage in the US

Traditionally in this country, marriage has been defined as a religious and legal commitment between a man and woman, as well as a public expression of love and commitment. Homosexuality and, in turn, h********l relationships are slowly, but surely, gaining acceptance in this country. However, as of yet, these couples have largely been banned from getting married. Some states have bestowed a few of the benefits and rights of marriage to gay couples under the provisions of new forms of commitment called "civil unions", which are essentially marriages without the use of the word "marriage". Many politicians have said they are against gay marriage but think it should be left up to the states to decide. However, the "full faith and credit" clause of the Constitution says that if one state makes a law, other states must recognize it. Thus, if one state allows a gay marriage and that couple moves to another state, the other state must recognize that marriage. This in effect allows one state to make same-s*x marriage legal in the entire country. Many politicians are calling for amendments to their state constitution or the U.S. Constitution to explicitly ban gay marriage, and many others have spoken out in support of the legalization of gay marriage. The history of this issue had been long and tumultuous, with many different actions being taken in various areas of the country. Buried deep in the bureaucracy, legalities, and heated opinions, is the core question regarding the civil rights of a subsection of society. Although progress was slow and uneven, LGBT rights advanced through the early 1970s. A monumental breakthrough occurred in 1973 when the American Psychiatric, Psychological, and Medical Associations removed homosexuality from their lists of mental disorders. In 1975, the U.S. Civil Service Commission removed its ban on the employment of gays and lesbians. Around this time, many cities such as San Francisco, Minneapolis, Seattle, and Detroit, and some smaller municipalities like Ann Arbor, MI, and Austin, TX, passed gay rights ordinances, outlawing discrimination against homosexuals with regard to employment or housing. ...read more.

The reaction to this ruling was immediate and forceful. Only one week later, three conservative congressmen introduced a constitutional amendment that would limit marriage to between one man and one woman. This conservative countenance was lead by Massachusetts governor Mitt Romney, a Mormon politician who declared that he would lead efforts to block same-s*x marriage, stating that, "[f]rom day one I've opposed the move for same-s*x marriage and its equivalent, civil unions."18 However, unlike in Hawaii where the amendment process moved quickly, in Massachusetts it would take two years to get a constitutional amendment on the ballots for voters to approve or disapprove. Despite this, in February 2004, the state legislature passed a proposed amendment that explicitly defined marriage in Massachusetts as between one man and one woman. The amendment would, however, have to be re-approved by state legislators to be put on the ballot in 2006, at the earliest. Although the amendment was voted down in 2005, a citizens movement was started to place a constitutional amendment on the ballot. To be placed on the ballot and be up for vote in 2008, this initiative had to receive 50 votes in two successive sessions of the legislature. On June 14th, 2007, the initiative received only 45 votes and same-s*x marriage is now secure in Massachusetts until at least 2012.19 At the time, Governor Deval Patrick said: "Today's vote is not just a vote for marriage equality. It was a vote for equality itself."20 The conservative state legislators also proposed the alternative of civil unions or domestic partnerships but the Massachusetts Court declared that nothing short of marriage would be acceptable in the fulfillment of its ruling on Goodridge.21 On May 17th 2004, just as the Court had ordered, the state of Massachusetts became the first U.S. state to allow gay marriage. However, due to the federal implications of the DOMA, these couples, though recognized as married by Massachusetts, received no recognition on a Federal level and therefore were still denied all Federal benefits that are afforded to married, heterosexual couples. ...read more.