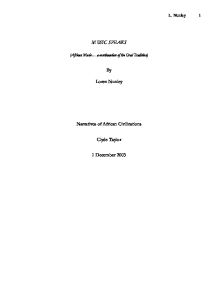 Music Speaks (African Music&amp;#133; a continuation of the Oral Tradition).

MUSIC SPEAKS (African Music... a continuation of the Oral Tradition) By Loren Nunley Narratives of African Civilizations Clyde Taylor 1 December 2003 From a performer's standpoint Abdullah Ibrahim has an incredible technical ability, the product of remarkable and meticulous practice. Yet his artistry is less a matter of speed or technical prowess than of a certain passion, born of a sense of discipline and integrity. Almost mystical, his genius is rooted in a tradition that developed long before the trumpets of the new world blared from British ships. This tradition of orality dates back to the beginning of time. All literate cultures grew out of an oral culture at some point in their evolution: all cultures rely on communication through speech and aural perception. Although the oral tradition originates from a ritual of secrecy, through music it is passed down to the masses, not just those 'entitled' to it. "Music is seen as one of the most striking manifestations of culture, for it is at once thought and action."1 This is the magic of music. "It infuses," as Lord Hailey has put it, "the activities of the African from the cradle to the grave."2 Music is a connecting link between cultural values and political life; it is a vital medium of communication that contributes to the maintenance and persistence of the political system of which it is a part. ...read more.

Therefore, every time a musician picks up his instrument he is living the word. A major misconception of the oral tradition is that it consists of and continues through words or (for the purpose of this essay) lyrics only. This misconception is defied every time a musician plays a note on his instrument. Along with words, vocalized tone and rhythm play an important role in the oral tradition. These two elements are just as important in oral communication as words because it allows for communication of a nonverbal nature, even subconsciously at times, in all languages. Bornman insists that "while the whole European tradition strives for regularity - of pitch, of time, of timbre, and of vibrato - the African tradition strives precisely for the negation of these elements."7 Traditionally African languages did not restrict a single word to having one particular definition; rather one had the freedom to speak freely using words at their own discretion with their own unique meanings in mind. Along with words came how the words were spoken. This was in fact the intention of the true oral tradition, made up of a person's unique response to another's oral statement. Ben Sidran explains: "...all oral communication is a direct reflection of the immediate environment and of the way in which members of the oral community relate to that environment." We now can draw the comparison to music with Bornman's assertion that "In music, the same tendency toward obliquity and ellipsis ...read more.

Ibrahim was compiling this incredible tribute to a man that had inspired him in so many ways not knowing that the day after he had written the song, Monk had been admitted to the hospital. For Monk had been written in honor of this legend and inspiration but now served as an inspiring piece for that same legend to fight through his illness. The song transpired more in the spirit of the training of a Bambara apprentice smith, than in the creation of a conservatory product. I think the great Charlie Parker said it best: "Music is your own experience, your thoughts, your wisdom. If you don't live it, it won't come out of your horn." As in imperial Mali, the musician's song is a call to arms. Just as the griots of Sundjata energized the enthusiasm of the warriors of Mand�, the musician of today must mobilize his audience for the collective tasks of nation-building. By singing the glories of the past, making it immediate and alive for his audience, the musician stimulates a remembrance of them; by urging sacrifice today for a greater tomorrow, he provides the expectation of a common future. Ibrahim explains to us at the end of his film that the words of Water from an Ancient Well not only represent the drought in Africa, the famine and the turmoil, but "it is asking for the water of wisdom so that we can face the future." He smiles and gently utters "Very soon Africa will be green and blooming again. ...read more.