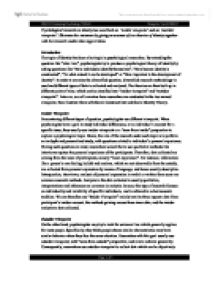 Psychological research on identity has used both an 'insider viewpoint' and an 'outsider viewpoint'. Illustrate this statement by giving an account of two theories of identity together with the research studies that support them.

Psychological research on identity has used both an 'insider viewpoint' and an 'outsider viewpoint'. Illustrate this statement by giving an account of two theories of identity together with the research studies that support them. Introduction The topic of Identity has been a hot topic in psychological researches. By extending the question like "who I am", psychologists try to produce a psychological theory of identity by asking questions like "How individuals identify themselves", "How human identity is constructed", "To what extend it can be developed" or "How important is the development of identity". In order to examine the diversified question, diversified research methodology is used and different types of data is collected and analyzed. The theories are then built up in different point of view, which can be classified into "insider viewpoint" and "outsider viewpoint". Later on, we will examine how researches are conducted in the two named viewpoint, then illustrate them with Social Constructivist and Social Identity Theory. Insider Viewpoint Encountering different types of question, psychologists use different viewpoint. When psychologists have a goal to study individual differences, or an individual's account for a specific issue, they usually use insider viewpoint or a "seen-from-inside" perspective to explore a psychological topic. Hence, the aim of the research under such topic is to perform an in-depth and personalized study, with questions related to individual's personal experience. ...read more.

Whether psychologists choose to use "insider viewpoint" or "outsider viewpoint" much rely on how they see the formation of identity and how identity affects the behavior of human. In other words, their basic assumptions on identity affect their viewpoint on identity, and therefore their topic and aim of research, the research question, their hypothesis, data collection, research method, and hence the theory. One example of research using "insider viewpoint" is Social Constructionism. Social constructionists, as its name suggests, see the identity of a person is socially constructed. It follows that identity is constructed in everyday life through interaction with others, hence it is different from people to people, culture to culture, and the study is an individualized one which seek for differences across people. Base on the assumptions, the research goal is to study the characteristics of individual's identity with respect to social and personal interaction. One good example for researching identity using insider viewpoint is Kenneth Gergen's theory that "We actively construct identities through everyday social relations" (Gergen, K, 1999). Constructing his own theory, Gergen used insider viewpoint in all three aspects. Gergen was using his own autobiography as the input for his research, in which he described how he had actively reconstructed his own identity with the aid of computer. ...read more.

Hence, data is outsider viewpoint. Moreover, experimental method is used to collect the data. There is no interaction between the researcher and the experiment, and the preference and the assumption does not affect the result of the measurement. Therefore, the method is quantitative and in outsider viewpoint. The analysis again stands in the outsider viewpoint, as the point allocated to ingroup and outgroup members are numbers, the comparison of points are done objectively. Conclusion Psychologists use both "Insider Viewpoint" and "Outsider Viewpoint" to conduct research on Identity. Whether they choose "Insider Viewpoint" or "Outsider Viewpoint" much relies on their initial preference: specific or universal, individual or human as a whole, differences across people or commons among people. Sometimes psychologists may choose to use "Insider Viewpoint" or "Outsider Viewpoint" for the data, the method and the analysis for the whole research; sometimes they may use both viewpoint at the same time. Marcia's Semi-structured interview, for example, collects insider data but use outsider analysis. Therefore, the use of viewpoint is very dynamic and subject to different research theme and aim. Gergen, K. (1999) An invitation to Social Construction, London: Sage Turner, J. and Brown, R. (1978) 'Social status, cognitive alternatives and intergroup relations', in Tajfel, H. (ed.). Tajfel, H., Billing, M., Bundy, R.P. and Flament, C. (1971) 'Social categorization and intergroup behavior', European Journal of social Psychology, vol.1, pp.149-77 DSE212 Exploring Psychology TMA01 Wong Ho Yin 03502017 Page 1 of 3 ...read more.