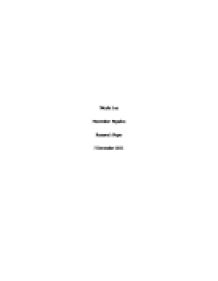 Nicole Lee November Papaleo Research Paper 7 December 2011 s****l Script Theory What drives a person to repeatedly enact in s****l activities such as solitary behaviors (masturbation, fantasizing) and partnered activities (oral s*x, coitus ect.)? Is it a natural urge prompted by an abundance of biological genes geared towards reproduction or are we impelled through culturally influential stimulants? These s****l responses are often times mysterious even to ourselves, thus driving unanswered questions as to why some actions turn us on and why some actions have no s****l impact on us. It has been theorized that s****l pleasure is what drives us, but to what extent is it by our own authority? The s****l script theory introduced by sociologists John H. Gagnon and William Simon aspires to answer these questions and give rise to new conceptions of how our s****l conduct develops over time. The s****l script theory proposes that s****l encounters between two s******y attracted parties are imprinted through the influence of mass media outlets-such as: books (e.g., karma sutra), TV shows (e.g., s*x and the City) and Websites (e.g., www.everythingtodowithsex.com). Through this exploitation of the media, society is then able to set the standard for the socially acceptable s****l norms within a culture. No longer are our s****l conducts viewed as "hard wired" s****l comportments, but instead our s****l conducts are learned from culturally produced messages. ...read more.

By utilizing and governing media outlets, which mainly hold western culture ideologies, Singapore can strategically advise and influence their cultures participation in s****l conducts, while still maintaining their traditional moral values (Pugsley, 2007). This is namely through the regulation and censorship of westernized TV shows like SATC and the construction of their own local magazine SWW. Singapore's government proficiently influences their own ideologies, while both confining and controlling western culture philosophy. This thus enables Singapore to promote the increase in birth rates or any particular values they want to set fourth at a specific time. s*x Scripts through the mass media are increasingly significant for it's an easy and accessible way for individuals to learn about and view s****l conducts. Particularly in the United States, young people spend 6 to 7 hours each day on average with some form of media, which is gradually displaying more explicit materials and s****l talk (Brown, 2002). Mainly, the s****l content in the media fluctuates between flirting to coitus. One TV Show in particular, significantly demonstrates and manipulates cultural philosophies pertaining to s****l behaviors and ambitions; this show is title as s*x and The City. The four main characters: Samantha, Miranda, Charlotte and Carrie, aim to break through gendered s****l roles, at one point or another, within their mission to experience "s*x like a man." ...read more.

Many of the traits and behaviors that were unacceptable a couple of years ago are now the main conducts of today's young adults. It has been surveyed that 82% of adolescents and young adults who had engaged in s****l intercourse between the ages of 15-20, reported having had oral s*x as did 12% of adolescents and young adults who had not had s****l intercourse (Pate, 2011). This is a great increase in s****l conduct when compared to young adults ten years ago. Even so, these abnormal s****l scripts show signs of change. Whether it is positive or negative, these scripts are a normal part of each individual's development. Being as these s****l scripts are ingrained deep in our minds it can be challenging to alter them, but alterations can transpire. Young adults are living proof of this, but still many of these scripts are rooted from the basic foundations which have remained unchanged for a very long time (Blackwell, 2008). In conclusion, s*x scripts whether through the media, personal experience or periodical publications, effectively depicts the impact of s****l script through cultural communications. These publicize communications disclosed the "ideal" gender roles of s****l conduct by culture, that label what s*x is, how to distinguish s****l settings and how to act through characterization portrayal. These sources of s****l scripting are an effectual depiction of appropriate s****l conduct through which s****l identities and gender are instituted and fortified. ...read more.