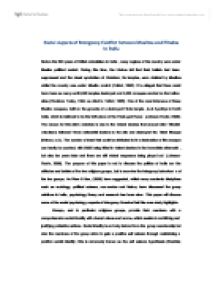 Social Aspects of Intergroup Conflict between Muslims and Hindus in India

Social Aspects of Intergroup Conflict between Muslims and Hindus in India Before the 200 years of British colonialism in India, many regions of the country were under Muslim political control. During this time, the Hindus felt that their beliefs had been suppressed and the visual symbolism of Hinduism; its temples, were violated by Muslims whilst the country was under Muslim control (Talbot, 1995). It is alleged that there could have been as many as 60,000 temples destroyed and 3,000 mosques erected on the hallow sites (Hinduism Today, 1994; as cited in Talbot, 1995). One of the most infamous of these Muslim mosques, built on the grounds of a destroyed Hindu temple, is at Ayodhya in North India, which is believed to be the birth place of the Hindu god Rama (Johnson-Roehr, 2008). The reason for this site's notoriety is due to the violent clashes that ensued after 150,000 volunteers followed Hindu nationalist leaders to the site and destroyed the Babri Mosque (Nelson, n.d.). The number of dead that could be attributed to the destruction of this mosque can hardly be counted, with 2000 being killed in violent clashes in the immediate aftermath, but also ten years later and there are still violent responses being played out (Johnson-Roehr, 2008). The purpose of this paper is not to discuss the politics of India nor the attitudes and beliefs of the two religious groups, but to examine the intergroup behaviours of the two groups. As Khan & Sen, (2009) ...read more.

The Hindu nationalist leaders could be viewed as very ideological leaders in that they have the vision for the Hindu people but this vision is very much based on their personal values and standards opposed to the social needs. Mumford et al., (2007) posited that it is ideological leaders that are more likely to be able to promote violent acts. They suggested that one reason why this might be is that those that are seen not to share the leaders values could themselves be subject to being condemned by their groups, and could actually be subject to social violence. Also, the ideological leaders exert value based control over their group which brings the group to believe the acts of violence are truly justified. The final Klandermanns' (2002; as cited in Hogg & Vaughan, 2007) concept is that of identity. The identity in this case is widely publicised as the religious groupings of Muslim and Hindu. What leads a group from peaceful collective action to acts of destruction and atrocities? Taylor, (2006) has three basic assumptions on why groups perform atrocities such has been seen in the Indian riots. The initial assumption, which is aligned with the previously discussed Klandermanns' (2002; as cited in Hogg & Vaughan, 2007) concepts, is that atrocities arise from the forming of groups and defining and classification of in and out group members. ...read more.

to some of the theories in social psychology as to why intergroup conflict might have occurred and how the extreme acts of violence ensued in India between the Hindu and Muslim people. This paper has discussed some aspects of social identity, self esteem hypothesis, collective behaviour and why violent acts might have, and still do occur, due to intergroup conflict. Some might argue that the way to reduce intergroup conflict is to try and prevent group formation. However, this is virtually impossible as it is important to note that it is human behaviour to want and need to form groups in order to attain a positive self identity and that is why sports programs across communities could have positive consequences. This is because participant in sports and supporting teams allows individuals to have contact with out-group members and also allows them to sub-categorise themselves and to identify with the sports groups. The intergroup conflict can then be played out on the sports field by trying to win the sporting event and therefore repositioning their group into a more favourable position. Branscombe & Wann, (1991) also suggest that the sports teams do not necessarily need to win in order for the individuals who participate or support the team to attain a greater sense of esteem. So perhaps a possible avenue of further research could be devising a sports program, in areas of intergroup conflict that foster and fully embrace the theories of social psychology that reduce intergroup conflict. ...read more.