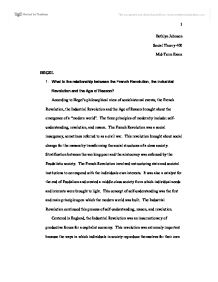 Social theory - What is the relationship between the French Revolution, the Industrial Revolution and the Age of Reason?

Bethlyn Johnson Social Theory 400 Mid-Term Exam HEGEL 1. What is the relationship between the French Revolution, the Industrial Revolution and the Age of Reason? According to Hegel's philosophical view of sociohistorcal events; the French Revolution, the Industrial Revolution and the Age of Reason brought about the emergence of a "modern world". The three principles of modernity include: self-understanding, revolution, and reason. The French Revolution was a social insurgency, sometimes referred to as a civil war. This revolution brought about social change for the masses by transforming the social structures of a class society. Stratification between the working poor and the aristocracy was enforced by the Feudalistic society. The French Revolution involved restructuring state and societal institutions to correspond with the individuals own interests. It was also a catalyst for the end of Feudalism and created a middle-class society from which individual needs and interests were brought to light. This concept of self-understanding was the first and main principle upon which the modern world was built. The Industrial Revolution continued this process of self-understanding, reason, and revolution. Centered in England, the Industrial Revolution was an insurrectionary of productive forces for a capitalist economy. This revolution was extremely important because the ways in which individuals in society reproduce themselves for their own needs created a mercantile capitalism. Vast trading networks were created and maintained for individuals to receive goods from far away lands. This, in turn, created a smaller world for individuals; they were now able to experience materials and ideas from a larger sociological sphere. This modern world encouraged a new way of looking at human nature, and in turn, at humanity. The death of Feudalism brought about the end of church rule over political and social ideas. Individuals realize that ideas can transform reality, and they are now prepared to die for the ideas of individuality. In short, reality is revolutionized. The Age of Reason also brought about revelations in veracity. ...read more.

Therefore, the labor the man produces also produces itself. This leads to the product the labor produced becoming an object that is separate from man, and is a power that can exist separate from man. Since the product from the labor has become alienated from man, so too then has the labor that produces the product. The second form is alienation from labor itself. This is a process that is external to the worker. The more the laborer produces, the more miserable they become. They are unable to attain free will within labor. Work is forced and labor is then "self sacrifice of reparation" (Marcuse, pg. 279). The stronger the external world becomes, the less the worker will need nature. The worker only works as a means of survival, and is alienated from his means of producing. Labor now belongs to someone outside the laborer, and therefore the laborer is alienated from himself. Alienation of man from his species is the third form of alienated labor. Man makes his life a process of will and consciousness. Since he is a conscious being, man turns his life activity (labor) into a means for existence. Man produces universally, for the good of the self and the whole. Man knows how to produce according to the standard of any species and knows how to apply inherent characteristics to an object. This signifies that man can create according to society and societies needs. Therefore, man is a species being. But the alienation of labor makes this species life of man a means of physical existence. Alienated labor alienates the spiritual nature of man, his human essence, from his body and from nature outside of him. Man begins to produce animalisticly, and man is therefore alienated from his own species existence. 39. What is the labor theory of value? According to Marx, the labor theory of value explains how labor relates to monetary gain. ...read more.

Specialization in labor causes a dissociation from others because of the nature of specializing, when ones interests do not correspond to anyone else. In turn, specialization of society dissociates individuals from the binding factors that would at one time bring them together. This differentiation creates greater abstraction within society. The abstraction is an external power that will eventually bring together a more significant integration. 65. Society as an organism Society can be said to have many parts that make up a whole. Some of these parts include: labor, specialization, dissociation, and sentiment. Society, in this sense, is similar to an organism. These many parts of society function as a whole for the benefit of society (the organism). According to Durkheim, these functions or social relationships perpetuate the conditions necessary for society to function as a whole. Societies parts only function within the context of society as a whole. Hegel's dialectic proposed an idea that the sum of parts is greater than the individual parts. Durkheim's society reflected this idea in that all parts of the division of labor equal the whole of society. 73. Magical power of money According to Hubert and Mauss, magically charged items were the early forms of money. Exchanges for goods or services could be accrued through magically charged items. This magic is made up of rituals, representations, and power. The authors consider money essentially a social fact with its value based in its power to purchase goods and services. The measure of confidence a person places on the value of things is also a notion of money. Money is not only value on display, but it is value that is permanent and non-deteriorating in its value. 74. Collective awaiting The notion of collective awaiting is one of the fundamental notions of social life. "No other notion generates both the law within society and economy." (Collins, pg. 226). Collective awaiting is essential collective thought, the idea that we have to wait upon others for this or that to happen. This act of anticipation forms the societal community in which one individual depends on another. ...read more.