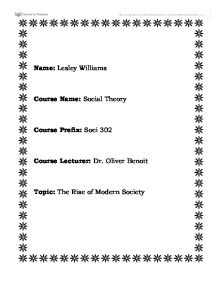 The Rise of Modern Society

Name: Lesley Williams Course Name: Social Theory Course Prefix: Soci 302 Course Lecturer: Dr. Oliver Benoit Topic: The Rise of Modern Society Although there are earlier and other writers whose work is important to sociology, Durkheim and Weber are generally considered to be the key figures in the development of sociological theory. Their work and ideas have led to the development of major theoretical perspectives which have been further developed by writers into particular schools of thought with their own analytical styles and interpretations. While not exact contemporaries, both sociologists were born in the nineteenth century and developed theories that responded to the economic, political and social changes of that century. With the aim to understand the nineteenth century industrialization, they examined the effects of these changes on the shape and quality of social life and how the changes might, or might not, improve this quality of life. Therefore, the question we should ask is what were these changes and how did they brought about modern society? Indeed, the development of early sociology can be seen as an attempt to answer this question. In this paper, I would further discuss how Durkheim's and Weber's theoretical perspectives explain the rise of modern society. ...read more.

Laws serve an authoritarian function in society, telling individuals what is suitable and unsuitable. Law replicates the primary forms of solidarity and therefore we have only to categorize the diverse forms of law in order to determine the different types of solidarity equivalent to them. For Durkheim, the division of labour shapes social solidarity, which establishes collective conscience. However, he also believed that modern societies would still need to build up new ways of strengthening social norms and a mutual sense of connection. Hence, Durkheim's functionalist's approach has also been applied to examine the study of religion. Durkheim placed himself in the positivist tradition, meaning that he thought of his study of society as dispassionate and scientific. He was deeply interested in the problem of what held complex modern societies together. His functionalist's analysis of religion examines how and to what extent religious beliefs and practices contribute to meeting the needs or prerequisites of society. In his work, "The Elementary Forms of the Religious Life" he describes how religion provides the basis of the collective conscience- the shared values and ideas of a society. Durkheim believed that "society has to be present within the individual." ...read more.

Weber saw that as industrial societies developed they were characterized by the growth and spread of large scale organizations- the Civil Service, the armed forces, churches, educational institutions and so forth. Large scale organizations were clearly having an increasing influence on all areas of social life. Weber was particularly concerned with the problem of efficiency in organizations. The "ideal type" blueprint for bureaucracy that he defined was the best way of ensuring efficiency in the administering of organizations. This "ideal type" of Weber's was based on his analysis of alternative forms of power and authority. This analysis provides the context for an understanding of Weber's theorizing on bureaucracy. However, Weber's belief in the efficiency of bureaucracy did not mean that he saw bureaucracy as a 'good thing' in modern society, but he believed that rationalization was a key feature of modern society and that it occurred in the fields of both religious belief and economic activity. In conclusion, it is understood that modern society could be defined as a society that is technical in nature and consist of complex institutions based on the theoretical perspectives of Durkheim and Weber. The society that we live in today was a result of a logical process that appeared natural and had a profound influence on theories and thoughts about nature and society. ...read more.