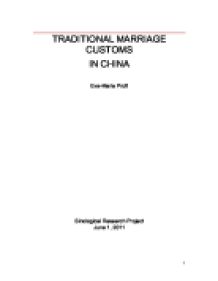 This Research paper will present an overview of traditional Chinese marriage system and customs from the Engagement to the Wedding Day, also including various forms of marriages in ancient times.

TRADITIONAL MARRIAGE CUSTOMS IN CHINA Eva-Maria Proft Sinological Research Project June 1, 2011 Introduction Marriage is and has always been one of the most affecting things in human life. All over the world wedding customs come in a wide variety and embodies different living environments and cultural traditions through which we can get a good understanding of the different living styles in different times and places. This Research paper will present an overview of traditional Chinese marriage system and customs from the Engagement to the Wedding Day, also including various forms of marriages in ancient times. The topic of Traditional Chinese Marriage Customs was chosen, because I personally went through the preparations and the celebration of a Chinese wedding in China myself, hence I want to show the difference of what people in Europe know and how the Western World had an influence on the traditional customs. The systemization of pre-existing elements of traditional Chinese wedding ceremonies is credited the scholars of the Warring States period (402 - 221 BC). Three texts, The Book of Rites, The Book of Etiquette and Ceremonial, and the Baihu Tong, describe Three Covenants and Six Rites, which were considered necessary elements of a marriage. However, the full ritual was so complicated that the custom underwent changes and simplifications. What remained constant were the two chief objectives, joining two families and guaranteeing succession with many descendants. Forms of Marriage As of Friedrich Engels there are three main principal forms of marriage, which correspond on the whole with the three main stages of the human development, which also can be seen in the Chinese history.1 The Consanguine Marriage is the earliest form of Marriage, in which the marriage groups are sorted according to the generations: Grandfathers and Grandmothers are all husbands and wives of another, as are their children. The latter's children will form yet another circle of husbands and wives and so on. ...read more.

The taboos revolving around the compatibility varied. For instance, in some places, a person born in the year of the snake should not be married to a person born in the year of a dragon, because both are aggressive animals. After the parents had compared the couple's birth information, the pre-wedding procedures could go ahead if the results were good. The bridegroom's family would inform the bride's family about the good result of the comparison and ask them to fix the time of the wedding. The parents on both sides arranged meetings in order to exchange more information on the couple and to get to know each other. No matter when or where they met, the Matchmaker would stay with them and introduce the two sides. After the bride's parents agreed to the marriage, the bridegroom's side would offer betrothal gifts. These not only signified that the woman had promised to marry the man and was not allowed to change her mind once the gifts were accepted; it also meant economic compensation for the bride's family. Some people would separate the engagement period into two stages, "offering minor betrothal gifts" and "offering major betrothal gifts". The time between offering those was not fixed. The minor betrothal gifts, like jewellery or tea, were a kind of engagement gift. The bridegroom's family would first offer the gifts to the bride's family through the matchmaker. Sometimes the future mother-in-law would visit the bride's family in order to present the gifts herself and the bride-to-be was expected to show respectful manners in order to show the seriousness about the marriage. After receiving the minor betrothal gifts, the bride's side would serve a big dinner and present some gifts like hats or shoes to the bridegroom's family in return, but the most important one was a piece of sewing or embroidery work which was personally made by the bride-to-be. ...read more.

After the wedding, the couple would arrange a day to visit the bride's family, who would invite relatives and host a banquet for the new couple. In this way, the groom would be accepted as son-in-law. Traditionally the newlyweds would visit one month after the wedding, but later this was shifted to an earlier date. Even when the couple returned to the bride's family home before the first month was up, they would not stay overnight, because the new couple should spend all nights of the first month of their marriage in the bridal chamber. After the honeymoon, all the rituals of the wedding would come to an end. For some families it is still considered inauspicious, if the newlyweds attend another couples wedding within the first month of their marriage. If this cannot be avoided though, both brides should exchange an apple and take a bit of it. Conclusion One can see that the Traditional Marriage Customs in China are very various, colourful and completely different from what we know. However, Chinese weddings cannot be generalized, considering the size of the country and the many different areas and peoples who all also had their own specific customs. In the long recorded history of over 2,400 years, the wedding customs evolved, underwent changes, were simplified and eventually were influenced by the Western culture by the increasing television, video and DVD culture. It shows, that although these changes took place, the main customs of the traditional wedding are still in use and honoured. In my opinion this is a very outstanding and interesting point since weddings nowadays show the merge of the old time thinking and customs and the modern time. A question which came into my mind while writing this research project was, if this kind of combination of old and modern would be possible in Western countries. Like the quote earlier in this Research Project was implying, until today a wedding in China is still a very important day, is handled carefully and conducted on a grand scale, as I experienced it myself. ...read more.