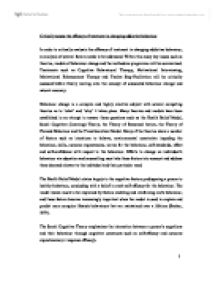 Critically assess the efficacy of treatment in changing addictive behaviour

Critically assess the efficacy of treatment in changing addictive behaviour In order to critically evaluate the efficacy of treatment in changing addictive behaviour, an analysis of several factors needs to be addressed. Within this essay key issues such as theories, models of behaviour change and the methadone programme will be summarised. Treatments such as Cognitive Behavioural Therapy, Motivational Interviewing, Motivational Enhancement Therapy and Twelve Step-Facilitation will be critically assessed before finally moving onto the concept of unassisted behaviour change and natural recovery. Behaviour change is a complex and highly emotive subject with several competing theories as to 'what' and 'why' it takes place. Many theories and models have been established in an attempt to answer these questions such as the Health Belief Model, Social Cognitive (Learning) Theory, the Theory of Reasoned Action, the Theory of Planned Behaviour and the Transtheoretical Model. Many of the theories share a number of factors such as intentions to behave, environmental constraints impeding the behaviour, skills, outcome expectancies, norms for the behaviour, self-standards, affect and self-confidence with respect to the behaviour. Efforts to change an individual's behaviour via education and counselling must take these factors into account and address those deemed relevant to the individual and their particular need. The Health Belief Model relates largely to the cognitive factors predisposing a person to healthy behaviour, concluding with a belief in one's self-efficacy for the behaviour. The model leaves much to be explained by factors enabling and reinforcing one's behaviour, and these factors become increasingly important when the model is used to explain and predict more complex lifestyle behaviours that are maintained over a lifetime (Becker, 1974). The Social Cognitive Theory emphasizes the interaction between a person's cognitions and their behaviour through cognitive constructs such as self-efficacy and outcome expectancies (or response efficacy). Outcome expectancy refers to the expectancy that a positive outcome or consequence will occur as a function of the behaviour. ...read more.

It is the most sought-after form of post-qualification training at a leading centre for training in the addictions (Leeds Addiction Unit, 1999) and is now widely used throughout the country, either as a form of treatment in its own right for clients with relatively less severe problems, or as a component of treatment for those with more severe difficulties. The principles of motivational interviewing are also consistent with recent theoretical formulations of the nature of the addictive process (Orford, 2000). Motivational Enhancement Therapy is based on the principles of motivational interviewing (Miller & Rollnick, 1991), but includes feedback to the client of the results of assessments carried out prior to the first session of MET, as used in a form of brief intervention known as the Drinker's Check-up (Miller et al., 1988). The brevity and relatively low cost of MET is also fully in accord with the recent interest in brief interventions in the UK alcohol treatment field. In an influential health care bulletin, Freemantle, Gill, Godfrey, Long, Richards, Sheldon, Song and Webb (1993) concluded that evidence from clinical trials suggests that brief interventions (for alcohol problems) are as effective as more expensive specialist treatments. In a situation of limited resources for healthcare provision and the increasing advocacy of briefer approaches to alcohol problems treatment, many purchasers of alcohol services are seeking to lower the costs of treatment in this service area. While some authors have warned that the available evidence did not justify the application of brief interventions to those with more severe problems (Chick, 1999; Heather, 1995). MATCH findings provide strong support for the hypothesis that briefer treatments, at least of the kind represented by MET, can be as effective as more intensive treatments among clients seen by alcohol specialist services. This integrated MET approach was delineated in a detailed therapist manual (Miller, Zweben, DiClemente, & Rychtarik, 1992) developed for Project MATCH, a multi-site trial of alcoholism treatments funded as a cooperative agreement by the National Institute on Alcohol Abuse and Alcoholism (NIAAA; Project MATCH Research Group, 1993). ...read more.

Studies also need to obtain detailed descriptions of respondents' pre-recovery substance abuse history in order to provide a clear picture of the pattern and severity of respondent's substance use. Drug and alcohol misuse treatments can be effective in reducing problem behaviours. This is shown by studies conducted over the past three decades. These studies have compared treatment to no treatment (or minimal treatment), and pre-treatment to post-treatment problem behaviours. Studies showing the effectiveness of drug misuse treatments have been conducted with clients with different types of drug problems, different treatment interventions, and in different treatment settings (Sorensen & Copeland, 2000; Hser, Evans & Huang, 2005)A comprehensive and detailed review concluded that drug misuse treatment is effective in terms of reduced substance use; improvements in personal health and social functioning; and reduced public health and safety risks (McLellan, Wood, Metzger, McKay & Alterman, 1997). Although there are areas of treatment where evidence is available to guide decisions about treatment provision, in other areas the available research evidence is insufficiently strong for this and in yet other (often important) areas of treatment, research evidence is lacking. In the absence of research evidence, decisions about the provision of treatment must be made according to criteria other than those of empirical research. A principal aim of substance misuse treatment research is to provide evidence to improve the effectiveness of treatments for problem substance users. Relevant evidence that can be used to improve treatment and patient outcomes requires more than studies of efficacy for specific procedures. The therapeutic process consists of more than just a clinical intervention. Evidence is also required about the nature and severity of client problems, about the processes which occur during treatment, about the role of staff competence and skills, and about the organisation and provision of services. However, it must be kept in mind that no two addicts are the same and one form of treatment may work for one and not the other. Therefore whatever treatment works for a particular individual in the road to recovery and sobriety is a successful one. ...read more.