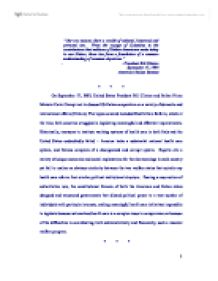 Review and discussion of 1993 meeting between the United States President Bill Clinton and Italian Prime Minister Carlo Ciampi to discuss US-Italian cooperation on a variety of domestic and international affairs.

"Our two nations share a wealth of cultural, historical and personal ties. From the voyage of Columbus to the contributions that millions of Italian-Americans make today to our Nation, those ties form a foundation of a common understanding of common objectives." - - President Bill Clinton September 17, 1993 American-Italian Summit * * * On September 17, 1993, United States President Bill Clinton and Italian Prime Minister Carlo Ciampi met to discuss US-Italian cooperation on a variety of domestic and international affairs (Clinton). The topics covered included Health Care Reform, which at the time, both countries struggled in legislating meaningful and effective improvements. Historically, measures to institute working systems of health care in both Italy and the United States undoubtedly failed - America lacks a substantial national health care system, and Italians complain of a disorganized and corrupt system. Experts cite a variety of unique economic and social explanations for the shortcomings in each country yet fail to realize an obvious similarity between the two welfare states that curtails any health care reform: their similar political institutional structure. Fearing a resurrection of authoritative rule, the constitutional framers of both the American and Italian states designed and structured governments that diluted political power to a vast number of individuals with particular interests, making meaningful health care initiatives impossible to legislate because nationalized health care is a complex issue to compromise on because of the difficulties in coordinating, both administratively and financially, such a massive welfare program. * * * I. The Inexplicable: Flawed Theories in Explaining the Failure of Both Systems Despite all their differences, both America and Italy suffer from public discontent towards their health care systems; therefore, one causal factor must connect the two frustrated nations and, thus, be the source of such woes. Scholarly explanations for the failure of each system, however, lose validity in a comparative analysis of both health care systems because proposed causes of one nation's system malfunction cannot be found in the other system's development. ...read more.

Conversely, the United States showed no significant increases in life expectancies, which the 1992 Medicaid and Medicare reform targeted, before the initiative in 1990 and after its implementation 1996. Regardless of the success of the American program, Americans remain among the healthiest people in the world, as do the Italians, yet resent towards the respective health care systems linger in both these nations. In spite of of their high statistical performance regarding national health, both Americans and Italians desperately seek reforms. The American health care system's virtual inexistence and the Italian establishment's unbelievable bureaucratic clutter incite great frustration and dissatisfaction in their respective citizens. The problems of both health care systems arose from both countries fear of powerful central governments. Their Constitutions outlay serious checks on the kind of government necessary to implement and coordinate a viable and efficient national health care system by strictly limiting the powers of their respective national governments. * * * IV. A Pear Tree Doesn't Yield Apples: Constitutions that Limit Health Care Both the Italian and American Constitutions share a common trepidation of authoritative government, which yield weak governments lacking the political resources needed to organize national health care systems. The American Constitution of 1787, for example, arose from an apprehension of authoritative governments due to the perceived tyrannical rule of English King George III (Countryman 175). "The history of the present King of Great Britain," reads Thomas Jefferson's Declaration of Independence, "is a history of repeated injuries and usurpations, all having in direct object the establishment of an absolute Tyranny over these States." (Declaration of Independence) This anti-authoritative intellectual climate catalyzed the creation of a Constitution featuring an array of checks and balances, including federalism, to curb possible usurpation by future American governments. States' rights promoted weak and limited federal initiatives, barring against extensive and expensive legislations such as national health care. For the first time, the processes of legislation, implementation and administration were divided into separate and independent government institutions. ...read more.

Path dependency theory states that institutions, once created by law or society, may impede future change as interested parties wish to continue such institutions; thus, as John Myles and Paul Pierson argue, "choices made in the past systematically constraint the choices of the future." (Pierson 306) So, for example, the health insurance companies in the United States would strongly oppose health care reform in the United State for fear of decreasing stock value. The American lobby tradition inflates the influence of path dependency as interested parties exert a strong financial influence over voting representatives. Social institutions arise as well that make reform difficult. In Italy, for example, the complex system of dual-payment of pharmaceuticals spurred corruption, particularly in the South where mafia prevails, so changing the system would surely meet staunch resistance. Both Italy and America face uphill battles in reforming their health care systems because the current systems created sticky institutions, which impede reform due to the increased number of interested parties. In conclusion, the Italian and American Constitutions created provisions limiting authoritative and centralized rule but, also, hindering massive national welfare programs like health care. The nature of limited government makes implementing large welfare overhauls difficult because representative governments open the doors to a variety of different interest groups. Furthermore, the legislative process in such governments creates systems prone to inefficient compromises. Large welfare programs such as national health care are marked by their need to be well organized and planned out, and such compromises too often impede such meticulous arrangements. Other political institutions further cramp the legislative process, like the party systems, lobbying, and regionalism. Simply stated, the nature of health care butts heads with the nature of weak, decentralized governments found in Italy and the United States. Despite their countless historical and cultural differences, Italy and America fall victim to a common enemy when it comes to significant health care reform: themselves. Without changing their institutions that impede comprehensive national welfare program legislation and implementation, meaningful advances to both their health care systems is doomed. ...read more.