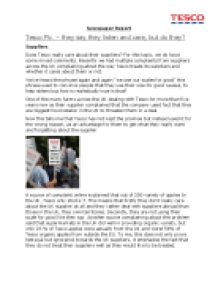 Tescos News Report - do they care about their suppliers?

﻿Newspaper Report Tesco PLC Tesco Plc. ? they say they listen and care, but do they? Suppliers Does Tesco really care about their suppliers? For this topic, we do have some mixed comments. Recently we had multiple complaints from suppliers across the UK complaining about the way Tesco treats its suppliers and whether it cares about them or not. We?ve heard the phrase again and again ?we use our scales for good? this phrase used to convince people that they use their size for good causes, to help others but how is realistically true is that? One of the many farms across the UK dealing with Tesco for more than five years now as their supplier complained that the company used fact that they are biggest food retailer in the UK to threaten them in a deal Now this tells me that Tesco has not kept the promise but instead used it for the wrong reason, as an advantage for them to get what they really want and forgetting about the supplier Pig farmers protest at Tesco annual meeting A source of complaint online explained that out of 200 variety of apples In the UK, Tesco only stocks 7. ...read more.

Customers Is Tesco maintaining a sustainable relationship with its customers? Tesco has always been promoting their relationship with the customers and we?re all aware of the promising Tesco offers popping up on social media, through TV adverts and newspapers. This seems like the absolute method that a business company like Tesco would use to get more customers A till receipt is printed out at the checkout counter at a Tesco supermarket in London, UK They say they listen and care about the customers, but yet they are the ones loosing share to competitors like Aldi. Why is this? Outraged customers recently complained in an online article saying that Tesco did abuse of the trust they put in them and that they care more about the transactional relationship. As a customer, there are many unpleasant things that Tesco has done which has seen their customers reducing and leaving them for their competitors. We witnessed the horse meat scandal which rocked the country for example. ...read more.

They have overstated their profit which has seen their share prices wiped off by 8.3%, this fell from 2.10 to just 19 pence in just days. This type of troubles is obviously going to have some negative effect on their shareholders. Due that problem, the worth of their shares has seriously decreased and they have lost a lot of shareholders. It will take them a really long time to rebuild the trust and the loyalty of their shareholders Tesco's share price in the last year, pictured, has been dropping and the company has issued three profit warnings in as many months On the whole, I think that Tesco used to care about its customers but recent prices and quality of products suggests that they are changing their ways which makes me think that they may be abusing the trust of customer. As for the suppliers, the answer is still divided. Some say Tesco does care or listen to them but others disagree with that. Finally the shareholders have been lied to and it doesn?t look like Tesco cares about them either ...read more.