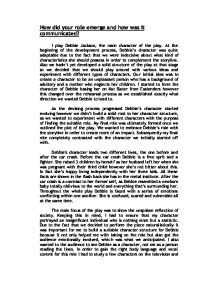 How did your role emerge and how was it communicated? I play Debbie Jackson, the main character of the play. At the beginning of the development process, Debbie's character was quite adaptable due to the fact that we were indecisive

How did your role emerge and how was it communicated? I play Debbie Jackson, the main character of the play. At the beginning of the development process, Debbie's character was quite adaptable due to the fact that we were indecisive about what kind of characteristics she should possess in order to complement the storyline. Also we hadn't yet developed a solid structure of the play at that stage so we decided that we should play around with various ideas and experiment with different types of characters. Our initial idea was to create a character to be an unpleasant person who has a background of adultery and a mother who neglects her children. I started to form the character of Debbie basing her on Kat Slater from Eastenders however this changed over the rehearsal process as we established exactly what direction we wanted Debbie to lead to. As the devising process progressed Debbie's character started evolving however we didn't build a solid root to her character structure, as we wanted to experiment with different characters with the purpose of finding the suitable role. ...read more.

Due to the fact that we decided to perform the piece naturalistically it was important for me to build a suitable character structure for Debbie because it not only helped me with taking on the role but also got the audience emotionally involved, which was what we anticipated. I also wanted to the audience to see Debbie as a character, not me as a person reading the lines. In order to gain the right body language and vocal control for this role I had to study a few characters on the television and also use emotional recall to put myself back in the situation where I felt all the emotions that Debbie is feeling. I modelled myself on a character called Little Moe in Eastenders. I felt that she is the perfect character that I should model Debbie on. I studied her for a while taking notes on her body language, facial expression and gestures, which were the main aspects that I have to ensure I deliver effectively if I were to take on board her role. The more I studied 'Little Moe' I began to gain a better understanding of how to form Debbie as a character and as a result it helped shape myself into my final role. ...read more.

She remembered that all her children and her only sister have all died in the accident. She realises that she has nothing left not even the control of her own life as nobody is listening to her. Although the audience get to witness Debbie's weak point throughout the play, it is only when it comes to this scene that society finally see her erupt. This scene sums up the message that we were communicating to the audience throughout the whole play. I had to project all of the theme behind the play through my acting, the sense of entrapment, solidarity and seclusion. This moment captures the realisation of her insignificance and it was crucial for me to portray this fact effectively. I kept Debbie's costume simple and it stayed the same throughout the whole play. The reason for this was due to the fact that we wanted to show a clear contrast between Debbie and other characters, portraying that while everybody is changing around her she still remains the same. I also wanted to reflect the period of time in which these events are happening to her. The whole storyline took place within a week, from beginning to end, so I wanted to portray this fact clearer through the use of costume. ...read more.