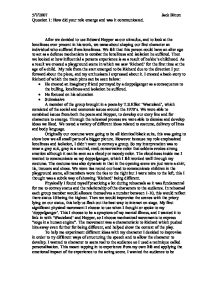 How did your role emerge and was it communicated.

After we decided to use Edward Hopper as our stimulus, and to look at the loneliness ever present in his work, we came about shaping our first character an individual who suffered from loneliness. We felt that this person could have an alter ego to act as a defense mechanism to combat the loneliness and isolation he suffered. Then we looked at how influential a persons experience is as a result of he/she's childhood. As a result we created a playground scene in which we saw 'Richard' for the first time at the age of a child. My role from the start emerged to be Richard due to the direction I put forward about the piece, and my enthusiasm I expressed about it. I created a back-story to Richard of which the main pints can be seen below: * He created an imaginary friend portrayed by a doppelganger as a consequence to the bulling, loneliness and isolation he suffered. ...read more.

The costume was also dynamic in that in the opening scene we just wore a shirt, tie, trousers and shoes. We wore ties round our head to communicate children in the playground scene, all members wore the ties to the right but I wore mine to the left, this I thought was a subtle way of showing 'Richard' being different. Physically I found myself practicing a lot during rehearsals as it was fundamental for me to convey status and the relationship of the characters to the audience. In rehearsal each group member would allocate themselves a number between 1-10, this would reflect there status 10 being the highest. Then we would improvise the scenes with the priory lying on our status, this help us flesh out the best way to interact on stage. My first significant physical movement I choose to use when I thought or spoke to my 'doppelganger'. This I choose to be a symptom of my mental illness, and I wanted it to link in with 'Wasteland' and Hopper, so I choose mechanical movements to express "cogs in a human engine". ...read more.

I wanted the audience to concentrate on what the character was saying so I made sure that when I was speaking the movement was simplistic, and just to reinforce the dialogue. When I initially started rehearsing the monologue on my own, I played the character as very bitter and recluse. The more I practiced the more I felt the character needed more to it in order for the words to gain impact with the audience. After showing it to my piers to gain advice from an onlooker's perspective and decided to change the way I was playing it. Instead of being so withdrawn and bitter I decided to contrast this and the character talking almost normal as if what she was doing wasn't wrong or out of the ordinary. By playing the part this way it made the audience sympathetic when they found out the truth about Richard. ?? ?? ?? ?? 5/7/2007 Jack Bitton Question 1: How did your role emerge and was it communicated. ...read more.