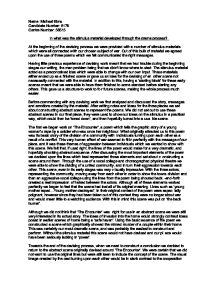 In what was the stimulus material developed through the drama process?

Name: Michael Sims Candidate Number: 8178 Centre Number: 56515 In what was the stimulus material developed through the drama process? At the beginning of the devising process we were provided with a number of stimulus materials which were all connected with our chosen subject of war. Out of this bulk of material we agreed upon the use of three poems which we felt communicated the right messages. Having little previous experience of devising work meant that we had trouble during the beginning stages our writing, the man problem being that we didn't know where to start. The stimulus material acted as a preconceived idea which were able to change with our own input. These materials either ended up as a finished scene or gave us an idea for the devising of another scene not necessarily connected with the material. In addition to this, having a 'starting block' for these early scenes meant that we were able to have them finished to some standard before starting any others. This gave us a structure to work to for future scenes, making the whole process much easier. ...read more.

Although all of these elements worked perfectly we began to feel that the scene had lost all of its original meaning. Lines such as 'young mother raped...Young mother destroyed', in their original context of the poem were especially poignant, however since they had been taken out of this context they were no longer about war and would mean little to a watching audience. With this in mind this scene was put on 'the back burner'. Although we did not think that 'The Encounter' was right for use in an abstract scene we were still very interested in its actual story. The ideas of invasion into the home would strongly contrast ideas posed in earlier scenes of home being a 'safe haven'. Using the basic essence of the poem we constructed a scene which graphically showed the mimed murder of a couple within their home. This was certainly our most dramatic scene, and was probably the easiest to construct and perform. Without the stimulus material this scene would not have devised and our piece would have been seriously lacking in 'power'. ...read more.

We wanted to show this through the use physical theatre. Starting with the line 'man belongs to Earth' we showed three forms rising from the ground chanting 'man belongs to Earth... man belongs to Earth'. This continued to a point where we began shouting other lines of the poem at each other. This was a very visually interesting scene used to catch the audience's attention early in the performance. The 'organic' nature of the opening sequence was use to strongly contrast the use of our lines from 'Disaster zone'. This poem is very man-made and urban. Describing the destruction of buildings and homes worked perfectly to conflict the messages in the previous poem. Shouting our chosen lines at the audience like headlines communicated our other, not so humane messages. The clashing of these very different stances alerted the audience and gave the piece a past pace to begin with. So to conclude the play we decided to recite the poem 'All things are connected' in full. In its entirety this poem crested a very retrospective mood which enabled the audience to consider all of what they had just seen. This poem enabled us to give our piece both a very strong start and finish. ...read more.