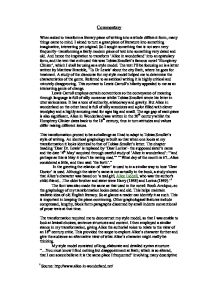 Commentary When asked to transform a literary piece of writing into a whole different form, many things came to mind. I aimed to turn a great piece of literature into something imaginative, interesting yet original. So I sought something that is not seen very frequently- transforming a fairly modern piece of text into something very dated and old. And hence the inspiration to transform 'Alice in wonderland' into an epistolary form, and the text that enthused this was Tobias Smollett's famous novel 'Humphrey Clinker', which I shall be using as a style model. The text I'll be focusing on is a letter written by Matthew Bramble, 'To Dr Lewis' about the city Bath, where he goes for treatment. A study of the discourse for my style model helped me to determine the characteristics of the genre. Referred to as satirical writing it is highly critical and minutely disapproving. This contrast to Lewis Carroll's hilarity appealed to me as an interesting genre of change. Lewis Carroll employs certain conventions so the conveyance of meaning through language is full of silly nonsense whilst Tobias Smollett wrote his letter in utter seriousness. ...read more.

to recreate the effects of an 18th century letter and reinforce my objective in changing the era of my piece. Thus using some aspects from the main texts, so as not to deviate from it, I elaborated it to convey and add deeper meanings to what is thought to being implied, the main text says "it would be of very little use without the shoulders" which I further explain "If one did try, in the depths of despair, for which I have no doubt one might, it'd be long before anyone found their failed attempts and most possibly their injured body, to heal the damages", giving the original text a sinister feel that such attempts would be possible due to "despair". This provided me with further scope to create my own interpretations and maintaining originality. The use of commas after a conjunction is an important grammatical feature of the text "and, perhaps,". It is not seen in modern texts but is frequent in 'Humphry clinker' in showing pauses within writing, so as to create an imagery of speaking directly to the reader. The commas implicate a tone in the writing connected to the pragmatics, and because it is a letter an impression of direct speech is trying to be conveyed. ...read more.

This parody is consistent throughout the text and helps shape meanings of the original text, transforming it to give an alternative view of what Alice's personal feelings were. The text was written in the form of a letter so the structure had to stay true to this style of writing, ending in "Dear Lorina, With Alice's love." Hear I incorporate both texts, "dear Lorina" from Humphry Clinker, and "with Alice's love" from my base text, where she is talking about sending her feet presents and mentions that she'd address she'd send it too would be "Alice's Right Foot, Esq. Hearthrug, Near the Fender, (with Alice's love)." By directly quoting from the main text helps keep a realistic idea of the base texts so as not to stray from the piece. Many things were altered in the drafting process, I had initially begun by just lightly commenting about each event, but later realised the depth Tobias Smollett uses in his letter to thoroughly criticise every aspect of bath. So I included more scenes from the novel, and carried on in the usual style to criticise these events. For example when she first arrives there she immediately begins to comment on the "long, narrow, bare and garish walls", this immediate approach develops her value for sophisticated d�cor, thus in turn creating a conservative attitude for Alice. ?? ?? ?? ?? ...read more.