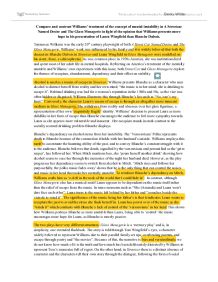 Compare and contrast Williams treatment of the concept of mental instability in A Streetcar Named Desire and The Glass Menagerie in light of the opinion that Williams presents more hope in his presentation of Laura Wingfield than Blanche Dubois.

Compare and contrast Williams' treatment of the concept of mental instability in A Streetcar Named Desire and The Glass Menagerie in light of the opinion that Williams presents more hope in his presentation of Laura Wingfield than Blanche Dubois. Tennessee Williams was the early 20th century playwright of both A Street Car Named Desire and The Glass Menagerie. Williams' work was influenced by his family and it is widely believed that both the characters Blanche Dubois in Streetcar and Laura Wingfield in Glass Menagerie were modelled on his sister, Rose, a schizophrenic. As was common place in 1950s America, she was institutionalized and spent most of her adult life in mental hospitals. Reflecting on America's treatment of the mentally unstable and Williams' own experiences with this issue, both Street Car and Glass Menagerie explore the themes of escapism, abandonment, dependency and their effect on stability. Alcohol is used as a means of escape in Streetcar. Williams presents Blanche as a character who uses alcohol to distract herself from reality and her own mind; "the music is in her mind; she is drinking to escape it". Habitual drinking was bad for a woman's reputation in the 1940s and 50s, so the vice was often hidden or disguised; Williams illustrates this through Blanche's lies such as "No, one's my limit." ...read more.

There is also a sense of dramatic irony when, at the end, the audience knows that Blanche is telling the truth about Stanley although the other characters think she is lying. Williams employs symbolism through the use of colours to connotate Blanche's apparent innocence in her 'white clothes that suggest a moth' and the reality of her prostitution when her clothing is 'stained'. In Glass Menagerie, Williams uses Tom's perspective to tell the audience of his own regret and hope for his sister, however Streetcar could be viewed as Williams sending a message to his audience about the treatment of mental instability in 1950s society in an attempt to bring about change. The combination of the dramatic devices he employs were intended to shock the audience and to accentuate Blanche's destruction. In Streetcar, Williams uses colour connotations as extended metaphor. Blanche is often dressed in white, representing purity, a contrast with her own loss of innocence. Blanche spills coke on her 'pretty white skirt' and tries to blot the coke stain out like she attempts to eradicate her past. The white is also contrasted with the 'red satin robe' Blanche wears while she and Stanley are alone. This juxtaposition of colours, between the innocent persona she portrays and the lust she displays around men with her 'smouldering' looks causes the audience to question her morality. ...read more.

Where this can not be described as a happy ending, Laura is ultimately given control of her own fate in 'blowing the candles out' as opposed to Blanche's lantern being ripped from the light, exposing her reality as she is passively taken away. There is contrast in that Laura's light is extinguished whereas Blanche's light becomes brighter - the reality driving her to the point at which her mind is so unstable, she cannot connect with what is happening to her. In conclusion, drawing on the similarities between Blanche, Laura and Williams' sister, it is credible that both characters are representations of Rose. The narrative technique in Glass Menagerie draws the audience to reflect Williams' hope that Laura will escape the darkness of mental instability. On the other hand, the dramatic devices employed by Williams in Streetcar emphasize Blanche's mental instability and her character is portrayed as much more detached from reality. Most importantly, we can see that Williams presents more hope in his presentation of Laura than Blanche due to the contrasting endings of these plays. Laura's fate is left more open in comparison to Blanche's total breakdown and destruction. In this aspect it could be said that Streetcar is a metaphorical representation of mental instability with the intent to raise awareness, whereas Glass Menagerie is a more personal, reflective work, highlighting Williams' regret and hope. ?? ?? ?? ?? Becky White ...read more.

This is a very strong essay which make continuous and well selected comparisons and contrasts between the texts and grounds them firmly in relevant contextual details to enhance an understanding of Williams' presentations. With closer textual analysis, this would achieve a top grade.