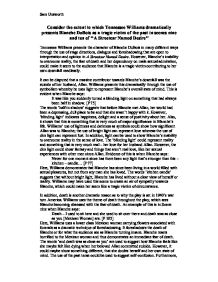 Consider the extent to which Tennessee Williams dramatically presents Blanche DuBois as a tragic victim of the past in scenes nine and ten of ''A Streetcar Named Desire'' Tennessee Williams presents the character of Blanche DuBois in many different ways through the use of stage directions, dialogue and foreshadowing that are open to interpretation and opinion in A Streetcar Named Desire. However, Blanche's inability to overcome reality, the fear of death and her dependency on male s****l admiration, could make it seem to the audience that Blanche is a tragic victim contributing to her own downfall needlessly. It can be disputed that a massive contributor towards Blanche's downfall was the suicide of her husband, Allan. Williams presents this dramatically through the use of symbolism whereby he uses light to represent Blanche's overall state of mind. This is evident when Blanche says: It was like you suddenly turned a blinding light on something that had always been half in shadow. [P 75] The words 'half in shadow' suggests that before Blanche met Allan, her world had been a depressing, dull place to be and that she wasn't happy with it. ...read more.

Also, Williams' use of layout and structure in this scene can further connote insanity in Blanche. The way the dialogue is structured makes it seem like Blanche is reacting to the Mexican woman's speech, but that the Mexican woman is not reacting to hers. Williams does this successfully as it leads the audience into questioning Blanche's state of mind. Also, Williams uses an audio cue to further evoke the idea of fear and death within Blanche to the audience. Evidence of this is, "The polka tune fades in." This adds to the dramatic presentation of Blanche and makes the audience think that the foreshadowing done by the use of the Mexican woman is even more significant. In addition, Williams' repeated uses of audio cues are used also as the technique of foreshadowing. Examples of these are: 'The polka dot tune fades in' and 'The blue piano begins to drum up' [P 111] These audio cues are used throughout the play and are associated with Blanche when she has a sense of fear and nervousness about her. These are both used in Scene ten when Stanley 'takes a step towards her', which is done in a threatening manner, before he eventually rapes Blanche. ...read more.

Williams uses a range of effects in scene ten to dramatize Blanche's final breakdown and departure from reality in the face of Stanley's physical threat. One example of this is, 'Lurid reflections appear on the walls around Blanche.' Williams uses this stage direction to represent the final demise in Blanche, and show her descend into madness. Here Blanche retreats entirely into her own world, however before, she chooses her perception on reality, according to her fantasy and what she wants. However - does this slow descendance into madness create an aurora of sympathy and victimization within the audience towards Blanche? I think to a certain extent it does, but Williams has created a play whereby I feel sorry for Blanche, yet think to myself that she somewhat deserves it for her naivety and treatment of others upon arrival in New Orleans. In the words of Michael Billington in his review of the play in The Guardian - "One ends up marvelling again at Williams's play" and that is exactly how I feel; a sense of astonishment over the situation Williams has created in this wonderful play. ...read more.