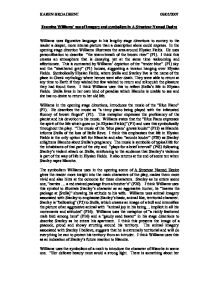 Examine Williams' use of imagery and symbolism in A Streetcar Named Desire Williams uses figurative language in his lengthy stage directions to convey to the reader a deeper, more intense picture than a description alone could express. In the opening stage direction Williams illustrates the area around Elysian Fields. He uses personification to describe "the warm breath of the brown river" (P1). I think this creates an atmosphere that is decaying yet at the same time welcoming and affectionate. This is contrasted by Williams' depiction of the "tender blue" (P1) sky and the "weathered grey" (P1) houses, suggesting a tension hanging over Elysian Fields. Symbolically Elysian Fields, where Stella and Stanley live is the name of the place in Greek mythology where heroes went after death. They were able to return at any time to Earth if they wished but few wished to return and relinquish the pleasure they had found there. I think Williams uses this to reflect Stella's life in Elysian Fields. Stella lives in her own kind of paradise which Blanche is unable to see and she has no desire to return to her old life. Williams in the opening stage directions, introduces the music of the "Blue Piano" (P1). He describes the music as "a tinny piano being played with the infatuated fluency of brown fingers" (P1). ...read more.

(P4). As more is learnt of Blanche's life the symbolism of s*x and death in the names of the streetcars can be understood. In scene four Blanche acknowledges that "[a streetcar named Desire] brought me here...where I'm not wanted and where I'm ashamed to be"(P53). I think Williams uses the streetcar "Desire" as a symbol for the s****l part of Blanche's life, which has ruined her. This takes her on to one named "Cemeteries", which will transport Blanche to Elysian Fields and the end of her free life. Symbolically in Laurel, it was "Mr Graves...the high school superintendent" (P9) who forced Blanche to leave and therefore onto her impending end. The streetcar names are also symbolic of the s****l lives of Allan, Blanche's husband who committed suicide when his homosexuality was discovered and Stella, whose desire for Stanley traps her into the committal of her sister and a life where violence is accepted. I think Williams is expressing a view that to be driven by desire is self-destructive. Blanche throughout the play is constantly bathing which becomes another source of irritation for Stanley. Her bathing makes her "feel so good and cool and - rested" (P86) but has to be repeated often. Symbolically Williams uses her bathing as a way for Blanche to cleanse herself of her past and her guilt of Allan's suicide, but as she cannot rid herself of her past her bathing is never over. ...read more.

Williams also uses the characters in A Streetcar Named Desire themselves as symbols. I think he uses Blanche to represent the old days in America of plantation culture entrenched in slavery. She represents a life that is disappearing, as have Blanches dreams, illusions and the family home. In comparison Stanley is symbolic of the new emerging America where immigrants are part of a vibrant, "raffish"(P1) multi cultural community. Stella is able to survive and become part of the future along with her baby. She gave up the old world to be with Stanley who represents the new America. The game of poker figures significantly throughout A Streetcar Named Desire and is symbolic of the relationships within the play. Blanche is operating a good bluff up to scene five as Mitch "thinks [she is] sort of - prim and proper" (P63). I think that Williams uses the game of poker to represent the bluffing and tensions, which occur between Stanley and Blanche. Stanley warns Blanche "to interest [him] a woman would have to - lay...her cards on the table" (P25). At the end of the play as Blanche leaves Elysian Fields "Eunice descends to Stella and places the child in her arms" (P124) and Steve declares, "This game is seven-card stud". Williams uses the poker game to show that Stanley has finished the game with the best hand and won the pot. Stanley has his wife, child, home and friends and Blanche leaves with nothing. ...read more.