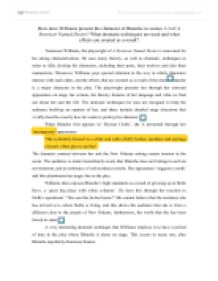 How does Williams present the character of Blanche in scenes 1-3 of A Streetcar Named Desire? What dramatic techniques are used and what effects are created as a result? Tennessee Williams, the playwright of A Streetcar Named Desire is renowned for his strong characterization. He uses many literary, as well as dramatic, techniques in order to fully develop his characters, including their pasts, their motives and also their mannerisms. Moreover, Williams pays special attention to the way in which characters interact with each other, and the effects that are created as a result of the drama. Blanche is a major character in the play. The playwright presents her through her outward appearance on stage, her actions, the literary features of her language and what we find out about her and her life. The dramatic techniques he uses are designed to help the audience build-up an opinion of her, and these include detailed stage directions that vividly describe exactly how he wants to portray his character. When Blanche first appears in 'Elysian Fields', she is presented through her 'incongruous' appearance: 'She is daintily dressed in a white suit with a fluffy bodice, necklace and earrings of pearl, white gloves and hat' The dramatic contrast between her and the New Orleans setting creates tension in the scene. The audience is made immediately aware that Blanche does not belong in such an environment, and an ambience of awkwardness results. ...read more.

What am I saying? ...I meant to be nice about it and say-Oh, what a convenient location and such-Ha-a-a! ...You haven't said a word to me. STELLA: You haven't given me a chance to, honey!' Blanche verges on hysterical in her incoherent speech, and at one point the way Stella glances at her is 'a little anxious.' She is presented as slightly eccentric, although the audience does not realise the significance of this until later in the play. A major way in which the playwright presents Blanche is through her interaction with men, more specifically with Stanley and his friends. She is intimidated when she first meets Stanley: '...[drawing involuntarily back from his stare]' She is shown to be instinctively wary of men, though she manages to control herself and speaks first. Nevertheless, she speaks very differently with Stanley than she does with Blanche, giving very short answers such as 'yes' and 'in the bathroom', and often hesitates uncomfortably: 'I-uh-...', 'Why, I-live in Laurel.' This is similar to her conversation with Eunice earlier, though here she is presented as being shy, rather than condescending in her short answers. She is obviously much more comfortable talking to Stella than anyone else, as she is the only one she refers to by a pet name, in this case 'honey'. This is important to Blanche's character as she is shown to be lonely- Stella is the only person Blanche has- her husband tragically committed suicide at a young age. ...read more.

An interesting dramatic technique used by Williams in scene III; showing all the men on their own, before the arrival of the two sisters. This allows the audience to see how Stanley and his friends are in the absence of women, and also emphasises the tensions created when the two enter. Blanche has high expectations when she walks into the room: 'BLANCHE: Please don't get up. STANLEY: Nobody's going to get up, so don't be worried.' It is through her language that Williams presents Blanche here. Presumably, in Belle Reve and her higher class upbringing than New Orleans, when a woman walks into the room the men have to stand up. This characterisation also serves as a dramatic technique- the playwright highlights the clash of two cultures within the house. An effect of tension is created as a result. She vies for male attention by standing in her underwear: 'She takes off the blouse and stands in her pink silk brassiere and white skirt in the light through the portieres. The game has continued in undertones This is another example of a contradiction within her character: earlier in the play she tells Stella to turn off the naked light bulb she is standing near, whereas now, she purposely presents herself under the full power of the light. She is presented as contradictory but also as desperate- forced to strip down to her underwear in a desperate attempt to get some male attention. Preceding this, she meets Mitch for the first time. ...read more.

This essay ends very abruptly! Despite a promising start, the analysis, although well illustrated, can become too descriptive at times and doesn't develop its arguments fully enough. With better planning, it would have achieved a top rating. ****