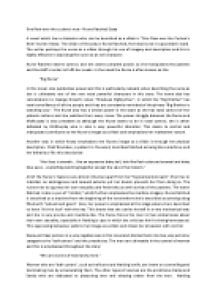 The Character of Nurse Ratched in &quot;One Flew Over the Cuckoos Nest&quot;.

﻿One flew over the cuckoo?s nest - Nurse Ratched Essay A novel which has a character who can be described as a villain is ?One Flew over the Cuckoo?s Nest? by Ken Kesey. The villain of the play is Nurse Ratched, the head nurse in a psychiatric ward. The writer portrays the nurse as a villain through his use of imagery and description and this is highly effective in depicting the nurse as an evil character. Nurse Ratched desires control, and she wants complete power, so she manipulates the patients and the staff in order to fulfil her needs. In the novel the Nurse is often known as the: ?Big Nurse? In this novel, size symbolises power and this is particularly relevant when describing the nurse as she is ultimately one of the two most powerful characters in this story. The name also has connotations to George Orwell?s novel, ?Nineteen Eighty-Four?, in which the ?Big Brother? has total surveillance of all the people and they are constantly reminded of the phrase ?Big Brother is watching you?. ...read more.

The Nurse forces the men to feel embarrasses about their own sexuality, especially in Harding?s case in which she criticises him for being homosexual. This oppressing behaviour adds to her image as a villain and shows her obsession with control. Kesey portrays women in a very negative was in this novel and divides them into two very extreme categories the ?ball-cutters? and the prostitutes. The men are ultimately in the control of women and this is emphasised throughout the story: ?We are victims of matriarchy here.? Women who are ?ball-cutters?, such as the Nurse and Harding?s wife, are intent on controlling and dominating men by emasculating them. The other types of women are the prostitutes Candy and Sandy who are dedicated to pleasuring men and obeying orders from the men. Harding acknowledges to McMurphy that the men are in total control of women and he says that they cannot challenge authority as they cannot do anything or say anything against the women simply because they are female. ...read more.

The Nurse always tries to cover up her breasts as they are her most womanly feature yet here she is totally vulnerable as her most private area has been exposed and so has her femininity. McMurphy symbolically exposes her hypocrisy and deceit, and she is never able to regain power again. Even though Ratched tries to give McMurphy a fate worse than death by having him lobotomized, Bromden dignifies McMurphy by killing him, assuring that McMurphy will always be a symbol of resistance instead of a fearful ending for future patients on Ratched?s ward. Overall Ken Kesey?s portrayal of Nurse Ratched as a villain in ?One flew over the Cuckoo?s Nest? is very effective and contributes to the overall message of the play. The reader can comprehend that the Big Nurse caused much of the mental illness in the institution from her desire to control everything and everyone and she ruined many people's minds and strayed away from her job of helping others. I think the Nurse is an ideal portrayal of a villain as she is both cruel and sadistic and has the typical characteristics of a villain in a novel. ...read more.