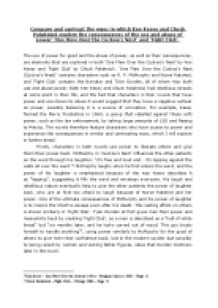 ﻿Compare and contrast the ways in which Ken Kesey and Chuck Palahniuk explore the consequences of the use and abuse of power ?One Flew Over the Cuckoo?s Nest? and ?Fight Club?. The use of power for good and the abuse of power, as well as their consequences, are elements that are explored in both ?One Flew Over the Cuckoo?s Nest? by Ken Kesey and ?Fight Club? by Chuck Palahniuk. ?One Flew Over the Cuckoo?s Nest (Cuckoo?s Nest)? contains characters such as R. P. McMurphy and Nurse Ratched, and ?Fight Club? contains the Narrator and Tyler Durden, all of whom may both use and abuse power. Both Ken Kesey and Chuck Palahniuk had rebellious streaks at some point in their life, and the fact that characters in their novels that have power and are shown to abuse it would suggest that they have a negative outlook on power, possibly believing it is a source of corruption. For example, Kesey formed the Merry Pranksters in 1964, a group that rebelled against those with power, such as the law enforcement, by taking large amounts of LSD and fleeing to Mexico. The novels therefore feature characters who have access to power and experience the consequences in similar and contrasting ways, which I will explore in further detail. ...read more.

Similarly, Nurse Ratched creates a threat of castration through the abuse of power in ?Cuckoo?s Nest? and emasculates the male patients by hiding her feminine nature as a way of controlling them as a part of the Combine. The Combine is a greater organisation that wishes to have power over society, the mental institute being one of the places under its control, and the way McMurphy rebels against it could link to Kesey?s outlook of power being a bad and corrupting presence, as Kesey himself was involved with the Beat movement in the 1950s, which rebelled against repression on society. A theme of castration is created when a patient named Rawler commits suicide by castrating himself, and the Chief remarks that ?all the guy had to do was wait?[8], suggesting that he felt as though the castration was inevitable anyway and would have been done by Ratched if not himself, similar to the way Durden uses the threat of castration to control men. Critic Catherine Cooper commented on this also: ?The men are all dehumanised and even emasculated, a fact which is emphasised by the first of three suicides in the novel, Old Rawler?s death by castration.?[9] I agree with her thoughts, and although Rawler?s suicide could be considered a consequence of Ratched?s abuse of power to emasculate the men, the suicides of Cheswick and Billy could be considered partly as a consequence of McMurphy?s use of power to disrupt the ward, which I will explore later in the essay. ...read more.

He ceased volunteering upon the death of a patient to whom he had grown attached to, similar to how the Narrator becomes outraged and tries to cancel Project Mayhem once he finds out about Big Bob?s death. Like McMurphy, Durden?s rebellion and use of power ultimately leads to his ?death? at the hands of the Narrator, who no longer feels he needs him. Though both McMurphy and Durden die due to the way they used their power, they are shown to have had a lasting effect on others, such as McMurphy?s presence described as still ?tromping up and down the halls and laughing?[16], and the fact that the orderlies at the mental institute at the end of ?Fight Club? say that they await Durden?s return, showing how their use and abuse have lasting consequences either by causing death or having an influence on the living. In conclusion, both through ?Fight Club? and ?One Flew Over the Cuckoo?s Nest?, Chuck Palahniuk and Ken Kesey present the use and abuse of power and their consequences in similar ways, showing how having power is a serious responsibility that is easy to be corrupted by, displayed through the way many characters abuse power and cause the death of characters in both novels. Both Palahniuk and Kesey therefore appear to support the view that power is often a negative force, changing people for the worse, much like the famous quote by Lord Acton in 1887 that ?absolute power corrupts absolutely?. ...read more.