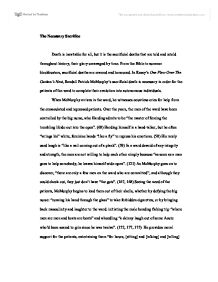 In Keseys One Flew Over The Cuckoos Nest, Randall Patrick McMurphys sacrificial death is necessary in order for the patients of the ward to complete their evolution into autonomous individuals.

The Necessary Sacrifice Death is inevitable for all, but it is the sacrificial deaths that are told and retold throughout history, their glory unravaged by time. From the Bible to summer blockbusters, sacrificial deaths are revered and honoured. In Kesey's One Flew Over The Cuckoo's Nest, Randall Patrick McMurphy's sacrificial death is necessary in order for the patients of the ward to complete their evolution into autonomous individuals. When McMurphy arrives in the ward, he witnesses countless cries for help from the emasculated and repressed patients. Over the years, the men of the ward have been controlled by the big nurse, who Harding admits to be "the master of forcing the trembling libido out into the open". (68) Harding himself is a hand-talker, but he often "wrings his" white, feminine hands "like a fly" to repress his emotions. (58) His rarely used laugh is "like a nail coming out of a plank". (59) In a ward devoid of any integrity and strength, the men are not willing to help each other simply because "as soon as a man goes to help somebody, he leaves himself wide open". ...read more.

With McMurphy's support, the patients collectively bested the big nurse, sitting in front of a blanked-out TV set and pretending to watch baseball while "she's ranting and screaming behind [them]". (128) Chief Bromden states "now that McMurphy was around to back them up, the guys started letting fly everything that ever happened on the ward they didn't like". (145) Not only did they fight for their rights, they were improving and restoring themselves as well. "Harding began flirting with all the student nurses, and Billy Bibbit completely quit writing what he used to call his "observations" in the log book". (177) Chief Bromden also observes at one point that outside the window, "the leaves were hitting the fence and turning into birds and flying away". (199) Here, the dead leaves represent the patients' original states and the birds the new state. McMurphy is helping them to fly towards freedom and away from the big nurse. The men were on their way to becoming individuals. However, there are hints of McMurphy's rapidly fading strength as the novel draws to its end. ...read more.

Reliance entirely upon McMurphy is a dangerous thing, and the classic example of this is Cheswick, who commits suicide by drowning himself after McMurphy takes a break from always backing him up. Another option would have been for McMurphy to leave the ward, but if McMurphy merely left, the patients would always be waiting his heroic return. McMurphy's death eliminates these possibilities, and completes the novel with hope. In fact, soon after McMurphy's death, the men begin to act according to their wills without help from others. The big nurse loses "her patients one after the other" as Harding "signed out and was picked up by his wife, and George transferred to another ward". (269) And of course, after hiding for so long, the Big Chief throws the panel that McMurphy couldn't lift through the window and escapes to freedom. (271) The evolution of the patients finally completes after McMurphy's sacrificial death. He sacrifices his life so the patients could get theirs back. It is only with McMurphy's sacrificial death that the patients of the ward are able to complete their evolution into autonomous individuals, and that is precisely why his death is a necessary one. ...read more.