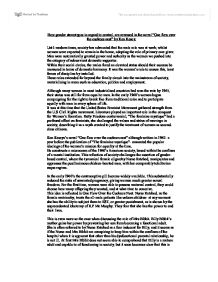 How gender stereotypes in regard to control, are reversed in the novel &quot;One flew over the cuckoos nest&quot; by Ken Kesey.

How gender stereotypes in regard to control, are reversed in the novel "One flew over the cuckoos nest" by Ken Kesey. Until modern times, society has advocated that the male role was at work, whilst women were expected to remain in the home, adopting the role of primary care giver. Men were automatically granted power and authority as the women we pushed into the category of subservient domestic supporter. Within their social circles, the males fared an elevated status should their success be measured in terms of domestic harmony. It was the woman's role to ensure this, least forces of discipline by installed. These roles extended far beyond the family circuit into the mainstream of society, materialising in areas such as education, politics and employment. Although many women in most industrialised countries had won the vote by 1945, their status was still far from equal to men. In the early 1960's women began campaigning for the right to break free from traditional roles and to participate equally with men in every sphere of life. It was at this time that the United States Feminist Movement gathered strength from the U.S Civil Rights movement. Literature played an important role in the conquest for Women's liberation. Betty Friedons controversial; "The feminine mystique" had a profound effect on feminists, she challenged the values and status of marriage in society, describing it as a myth created to justify the treatment of women as second-class citizens. ...read more.

His participation in political matters in the hospital (He is president of the patients council) and his strong sense of education, are highly valued by the other patients. He is the only inmate to provide rational explanations. It is he who tells McMurphy how Nurse Ratched is capable of maintaining her power, how electroshock therapy works, and what a lobotomy really does to people. Potentially, he could represent the leaders of the feminist movement in the 1960's America, the ideal politician able to provide direct honesty that citizens rebelling against society were seeking. However this is all undermined by his wife, his possessor, Vera Harding. She herself is voluptuous and beautiful. She makes Dale feel inadequate, with her figure and sneering remarks on his effeminacy which is symbolised by his graceful unmanageable hands. According to Bromden: "He's got hands so long and dainty I think they carved each other out of soap, and sometimes they get loose and glide around in front of him, free as two white birds, until he notices them and traps them between his knees: It bothers him that he's got pretty hands." Combined with the terror of his wife and her accusations about his homosexuality and weakness, Dale Harding chooses to remain in the institution voluntarily, as any confidence he may have gained is eliminated. ...read more.

In a number of circumstances he challenges the authority of the big Nurse. He appeals and campaigns for the re-instatement of masculinity, not only for himself but also for the other men. He petitions for the men's right to masculine sports, for instance the fishing trip and the baseball game. These requests are often deprecating, although we do glimpse occasions when even the nurse must relinquish her control, and dignity. For instance, when Mc Murphy rapes The Big Nurse, which is notably the first example of violent, active defiance in the novel, her large breasts are exposed, her "only flaw of which she is so bitter" according to Bromden, she is incapacitated by his sexual assertion. In One Flew Over the Cuckoos Nest, the poignant reversal of gender-based stereotypes reflect the conflict of sexual bias in society at the time. The women in the novel adopt masculine-orientated positions of authority, they manipulate and possess the impassive men with their sexuality, their authoritative relationship status and explicitly in the case of Nurse Ratched, the enforcement of strict disciplinary measures, i.e. the lobotomy of Mc Murphy in the totalitarian-esque regime of the institution. The male societal position is dehumanised, as they become weak and constrained within the confines of the mental institution. They are bound by the manipulative tactics of the Nurse, consigned to the infiltration of their lunacy, and represent the post-war stereotype of the inertly submissive wife. ...read more.