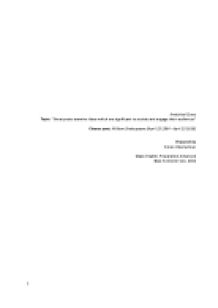 William Shakespeare examined ideas that contributed to the development of modern society, while engaging his past and present audiences.

﻿Analytical Essay Topic: "Great poets examine ideas which are significant to society and engage their audiences" Chosen poet: William Shakespeare (April 23 1564 - April 23 1616) Prepared by Simon Oberlechner Class: English, Preparation Advanced Due: Semester two, 2012 'A peace is the nature of a conquest; for then both parties are subdued, and neither party loser'- William Shakespeare, perspective William Shakespeare examined ideas that contributed to the development of modern society, while engaging his past and present audiences. For successive achievement, he became accustomed with the concept of love. Shakespearian texts engaged through personal afflictions. The motive behind Shakespeare's immortal genius lies within his style and perspective. This paper will stress Shakespeare?s views and discuss their relevance to modern society. Topics will include; the use of love and conflict, an innovating style, the ability to define and Shakespearian analogies. Works covered; 'Sonnet 116', 'Sonnet 36', 'Sonnet 129', 'Richard III' and 'Hamlet' . An analogical comparison to William Morris? 'Love is enough' will also emphasis significance. William Shakespeare was born in Stratford-upon-Avon, England on the twenty third of April 1616 to a loyal family of Catholics. At present time, Christianity was demanding prominence. Shakespeare was raised in a persecuted Catholic life, resulting in a self-effacing stance. It demonstrated common for Catholics to alternate religions unable to decide on their beliefs. William Shakespeare viewed the world originally. He was competent in determining issue?s that hindered society and creatively synthesise a correction. His works all have an allegorical connotation producing in depth explanation. Through these I hope to assure you, that William Shakespeare is a part of modern society as Apple Computers, or Microsoft. Sir Henry Parks is the father of Australia's colonial federation. William Shakespeare deservers regard as to the father of Modern English. Fundamentally, Shakespeare?s poetic style was in Iambic pentameter. Iambic pentameter includes ten syllables a line. The syllables are broken into five groups called iambic feet, or iambs. ...read more.

The sonnet is written as an extended metaphor. Increased vulnerability serves equal to 'sonnet 116'. The adjective 'Take' (Shakespeare four) produces imagery of 'worth' and 'truth' being taken as consequence of 'fortunes spite' (Shakespeare two), suggestive of a personal affliction occurring in the composer?s life. The young man mentioned in Shakespeare?s texts serves as the love for his son. Scholars argue that William Shakespeare was homosexual because of these references; ?over the centuries some readers have posited that Shakespeare?s sonnets are autobiographical, and point them as evidence for a young man ?Wikipedia. Shakespeare used grief to produce imagery through substantial descriptors, to include a reader in experience. 'Sonnet 37', speaks in direct to make a promise. Line three is demonstrative, 'for whether beauty, birth, wealth or wit...I make my love engrafted to this store'. The persona clearly states his commitment for a love. Metaphor, 'this store' acts to represent society. William Shakespeare grew belief that his love was never satisfied toward his son. The love in line three is reflective of the young man. The persona says that their love will be spread around the world. The belief Shakespeare inherited, that his spreading of love would induce a balance, is highly suggestive of religious perceptions. An analytical perspective, demonstrates the persona in deep sorrow due to an affliction. Line three, is perceived as a promise to an afterlife, or an internal recovery process. Defining between is unlikely to occur due to the distance of era. Quadrant four of the sonnet, contradicts line three's promise. A paradox, used in line fourteen distorts meaning of the sonnet, suggesting confusion ('look at what is best... this wish I have... ten times happy me.? Line fourteen, suggests a perspective of stubbornness. The persona surrenders their ability to choose best, however emphasizes their wish. The contradiction of meaning reflects Shakespeare's own wit. However, under close examination, the persona is saying that their wish is the choice of their loves best. ...read more.

Complimenting the sonnet's concept of an incomplete quest. The couplet, demonstrates society as without consent. 'Sonnet 129' says that society is aware of lusts deception, 'well knows'. The sonnet, further states society does not avoid lust, 'no one knows well'. Strongly suggesting, all humanity thinks identical towards sexual desires, described; 'deceiving heaven'. 'Sonnet 129' states affliction of lust. The tone strongly proposes a derogatory perspective. The rhetorical purpose, overstates society. A reflection is allegorically implied, to examine mistakes. William Shakespeare's perspective of a lustful man is demonstrative in this text. Shakespeare defines the effect of sexual desire as a great human flaw. The sonnet implies lustful behaviour is against religious views, 'to shun the heaven' (fourteen). 'Sonnet 129' presents an argument against lust and produces a perception of disgust and untruthfulness through an extended metaphor. The lust created in 'Sonnet 129' is stereotypical of the 21st century. Shakespeare?s ability to define and argue against issues way by looking to the future inspired many to chase their own desire. William Shakespeare examined ideas relevant to society and successfully engaged his audience through his genius interpretations. Throughout this paper, I have tried to convince you that William Shakespeare is the father of modern English. His ability to synthesise poetic techniques in 'Hamlet' and 'Richard III' amplifying their effect, revolutionised literature. Producing a connection between love & conflict in 'Sonnet 116', innovated perceptions of the English language. His definition in 'Sonnet 129', contributed to the structure of Modern English. William Shakespeare?s texts have been translated into every major language due to specified analogies, thus allowing scholars to interpret their true meaning. Approximately 157 million pages are in Shakespeare's name. God, a major contributor of society, has 132 million pages. William Shakespeare guided the future. Using the death of his own son in 'Sonnet 36' to show the world their faults, demonstrated his clarity. William Shakespeare?s texts are to be summarised as exact representations of the world. In final conclusion, his contribution to modern English is ubiquitous. William Shakespeare was not for an age, but for all time- Ben Jonson, friend of William Shakespeare. ...read more.