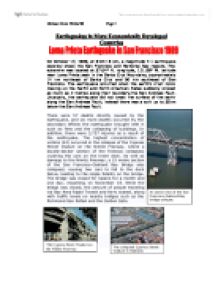 A comparison of the Loma Prieta Earthquake and the Kobe Earthquake.

Earthquakes in More Economically Developed Countries On October 17, 1989, at 5:04:15 pm, a magnitude 7.1 earthquake severely shook the San Francisco and Monterey Bay regions. The epicentre was located at 37.04� N. longitude, 121.88� W. latitude near Loma Prieta peak in the Santa Cruz Mountains, approximately 14 km northeast of Santa Cruz and 96 km southeast of San Francisco. The earthquake occurred when the earth's crust rocks making up the Pacific and North American Plates suddenly slipped as much as 2 metres along their boundary-the San Andreas Fault. Unusually, the earthquake did not break the surface of the earth along the San Andreas Fault; instead there was a split up to 35km below the San Andreas Fault. There were 57 deaths directly caused by the earthquake, and six more deaths occurred by the secondary effects the earthquake brought with it such as fires and the collapsing of buildings. In addition, there were 3,757 injuries as a result of the earthquake. The highest concentration of victims (42) occurred in the collapse of the Cypress Street Viaduct on the Nimitz Freeway, where a double-decker section of the freeway collapsed, crushing the cars on the lower deck. As well as damage to the Nimitz Freeway, a 15 metre section of the San Francisco-Oakland Bay Bridge also collapsed, causing two cars to fall to the deck below, leading to the single fatality on the bridge. ...read more.

Between 6 and 8 billion dollars were spent rebuilding San Francisco. After the earthquake struck, despite it being not expected America gathered immediate help and relief. Private donations poured in to aid relief efforts and on October 26, President George H.W. Bush signed a $3.45 billion earthquake relief package for California. The USGS Earthquake Hazards Program involves scientists and local governments to try and protect America from such devastating outcomes form earthquakes. Earthquakes remain a serious threat to the San Francisco Bay area. Large quakes will certainly shake this built-up area in coming decades, but the impacts of these events can be reduced. Continuing advances in science and engineering and improved methods of construction, land use, emergency response, and disaster recovery will offer new ways to limit losses and reduce impacts of future shocks. On January 17, 1995, at 5:46:52 am, a magnitude 7.2 earthquake shook Kobe and its surrounding towns. The epicentre was located at 34.641� N. and 135.179� E, on the northern end of Awaji Island, 20km away from the city of Kobe. The earthquake occurred due to a build up of friction between the Pacific, Eurasian and the Philippine tectonic plates. The denser pacific plate is being pushed under the dense Philippine plate. This plate is being subducted under the less dense Eurasian plate creating a very big collision. ...read more.

Supposedly earthquake-proof roadways failed to do their job and collapsed. Kobe is situated on a strip of flat land between high mountains and the sea. This rather narrow strip of land carries all the communications routes between north-eastern Japan and western Japan. Emergency aid for the city needed to use these routes, but many of them were destroyed during the earthquake. The famous high-speed railway link connecting Tokyo with western Japan was cut in half when the bridges in Kobe fell down. The only other two rail links were also cut during the quake. Damage worth an estimated �100 billion was caused to roads, houses, factories and infrastructure (gas, electric, water, sewerage, phone cables, etc). Seeing as the authorities were slow to rescue everyone and accept that they needed help, you would have thought they would rush everything else to make up for it. But they didn't! Water, electricity, gas, telephone services were fully working by July 1995 (7 months later), a year after the earthquake 80% of the port was working but the Hanshin Expressway was still closed and by January 1999, some people still had to live in temporary accommodation! Yet, as well as the above bad things, the Government passed new laws for the manufacture of buildings, more instruments were installed to measure vibrations and over 134,000 housing units had been built. ?? ?? ?? ?? Melissa Claire Wicks 9S Page 1 ...read more.