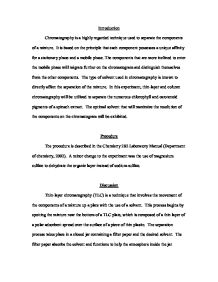 Introduction Chromatography is a highly regarded technique used to separate the components of a mixture. It is based on the principle that each component possesses a unique affinity for a stationary phase and a mobile phase. The components that are more inclined to enter the mobile phase will migrate further on the chromatogram and distinguish themselves from the other components. The type of solvent used in chromatography is known to directly affect the separation of the mixture. In this experiment, thin-layer and column chromatography will be utilized to separate the numerous chlorophyll and carotenoid pigments of a spinach extract. The optimal solvent that will maximize the resolution of the components on the chromatogram will be exhibited. Procedure The procedure is described in the Chemistry 282 Laboratory Manual (Department of chemistry, 2002). A minor change to the experiment was the use of magnesium sulfate to dehydrate the organic layer instead of sodium sulfate. Discussion Thin-layer chromatography (TLC) is a technique that involves the movement of the components of a mixture up a plate with the use of a solvent. ...read more.

For example, a more polar solvent will compete with the polar components for positions on the polar adsorbent and also transport its counterpart along the plate until it finally becomes adsorbed. As a result, the polar components of the mixture will remain in the mobile phase for a longer period and thus travel a larger distance along the plate. However, the use of a non-polar solvent will cause the polar components to remain stationary since they have a much larger attraction for the adsorbent than the mobile solvent. In this experiment, three solvents of different polarities were used to separate the pigments in the plant extract. The 9:1 hexanes-acetone solvent was the least polar of the three and was the most unsuccessful solvent in separating the extract, as it only distinguished two pigments. This result may attribute to the solvent's incompetence in both converting the polar components of the extract into the mobile phase and blocking the binding positions on the stationary adsorbent. ...read more.

There were a few instances throughout the experiment that may have slightly altered the obtained results. Firstly, the lid to the jar was left open for short periods, which may have caused the more volatile acetone to evaporate. Consequently, the hexanes-acetone ratio might have been hindered, resulting in a more non-polar solvent. Secondly, the sample on the 5:5 hexanes-acetone plates may have been overloaded because the sample ran as a streak near the origin. The streak distorted the illustration of the pigments on the chromatogram, making them difficult to distinguish. Conclusions The best solvent used to separate the components of the spinach extract was determined to be a 7:3 hexanes-acetone mixture because it divided the spinach extract into the greatest number of components. Additionally, thin-layer chromatography provided evidence that the pigment beta-carotene was present in spinach, as a yellow-orange pigment encompassed identical retention factor values on every plate. This experiment may be improved through the use of a longer TLC plate. A longer plate will magnify the migration distances of each component, which will make them easier to distinguish on the chromatogram. ...read more.