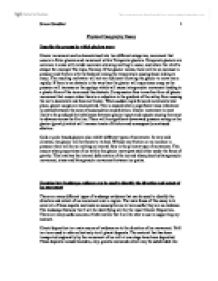 Describe the process by which glaciers move

Physical Geography Essay Describe the process by which glaciers move Glacier movement can be characterised into two different categories, movement that occurs in Polar glaciers and movement within Temperate glaciers. Temperate glaciers are common in areas with milder summers allowing melting to occur, and where the relief is steeper for example The Alps, Norway. If the glacier moves, there will be an increase in pressure and friction with the bedrock raising the temperature causing basal sliding to occur. The resulting meltwater will act as a lubricant allowing the glacier to move more rapidly. If there is an obstacle in the way then the glacier will experience creep as the pressure will increase on the upslope which will cause intragranular movement leading to a plastic flow of the ice around the obstacle. Compression flow is another form of glacier movement that occurs when there is a reduction in the gradient of the valley floor causing the ice to decelerate and become thicker. When sudden rapid forward movements take place, glacier surges are encountered. This is caused when a significant mass imbalance is created between the zone of accumulation and ablation. Glacier movement is most likely to be produced by imbalances between glacier inputs and outputs causing the snout to advance across the firn line. ...read more.

it comprises a variety of different till deposited by separate advances during each of the major glaciations. A threefold sequence of drift deposits associated with the Anglian Glaciation has been located in a cliff section at Corton in north-east Suffolk. This information is an excellent account as to the appearance of erratics form northern Britain and Scandinavia which indicates an early advance of ice form the north. The upper layer of bluish-grey, chalky Lowestoft Till suggests that the parent ice mass carried these deposits from the chalk scarplands to the west. Another type of till can also be included to account for the direction and extent of ice movement. Ablation till refers to material carried anglacially or supraglacially that has been deposited when the glacier melted. The orientation of the long axis of the till lines up with the direction of ice flow which produces a distinct line that can visually explain where the ice has come from. Initially the stones will be deposited horizontally but if there is a subsequent glacier re-advance the stone will be pushed forward from behind tilting them upwards. Till fabric analysis is another source of information which explains how the orientation of deposited material attempts suggests where the ice sheets originated from. ...read more.

Six different groups have been identified, the most predominant being the Pomerian, Frankfurt-Oder and Brandenburg. Glen Rossa in Scotland is a more local example of a terminal moraine that extends most of the way across the floor of the valley. It marks the limit of the Loch Lomand advance. Lateral moraine can help to identify how debris derived from frost shattering of the valley sides can be carried along side the glacier. When the glacier melts, however, it leaves an embankment of material along the valley side. Other moraine deposits, such as medial, recessional and push moraines are also good sources of supporting evidence for glacier movement. From the analysis of till to the existence of moraines, it is clear that the landscape is an excellent source of evidence for identifying the direction and extent of ice movement. The unusual appearance of erratics on the Yorkshire Dales are great historical landmarks that provide geologists with resources that tell more about the history of the area than any textbook and the distance that they cover can be used to mark the extent of the ice movement. These and many more landscape features are windows through which the past can be viewed past and will continue to be a great resource for researchers in the future. Simon Standfast 1 ...read more.